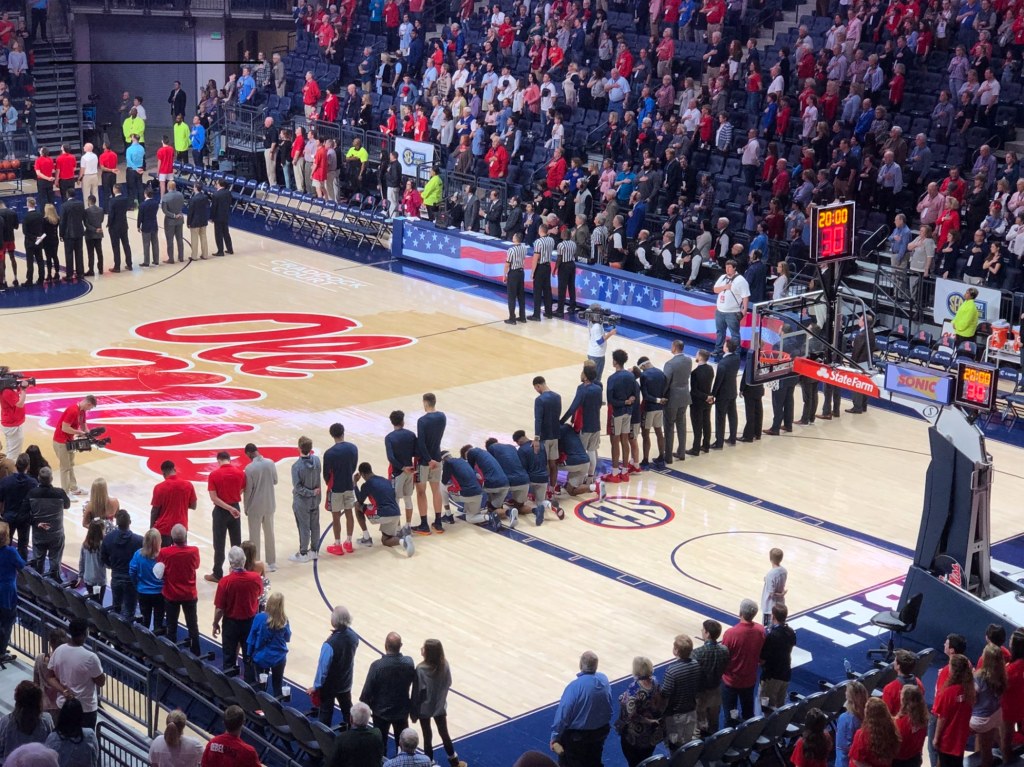 With pro-Confederate rallies taking place in Oxford on Saturday, six Ole Miss Rebel basketball players decided to take a knee this afternoon during the national anthem for their game against Georgia.

The game is ongoing, and it impossible to confirm that the two are related, but it seems easy to piece two and two together. To clarify, the pro-Confederate protestors are not from Oxford, yet are a neo-Confederate group from outside the state.

With our angle, it’s not possible to confirm the identity of the players who knelt for the anthem. We can say that there were six players who knelt, one of them being sophomore point guard Devontae Shuler, identifiable from behind as the player in a headband.

Handful of #OleMiss hoops player kneeling during the anthem with the rallies going on in Oxford today. pic.twitter.com/FzRFiLBYeP

Ole Miss head coach Kermit Davis said in his introductory press conference this past spring that the Rebels would be a team that stood for the anthem and respected the flag. This move clearly goes in stark opposition to that point, however with extenuating circumstances regarding the rallies ongoing in Oxford, it’s understandable for him to bend his policy if he were to have known beforehand.

Kneeling during the anthem first began as a way to protest racial injustice around the country, starting when former San Francisco 49ers quarterback Colin Kaepernick back in 2016.

The Rebels have stood for the anthem for every game this year before today. This story will be updated as more information flows in.

Up to eight players were kneeling at one point.

The decision to kneel came in protest to the pro-confederate rallies, according to Rebel guard Breein Tyree and head coach Kermit Davis.

Davis: “It was all about the hate groups that came to our community to try to spread racism and bigotry. It’s created a lot of tension for our campus. Our players made an emotional decision to show these people they’re not welcome on our campus. We respect our players’ freedom and ability to do that.”

Tyree: “We’re just tired of these hate group coming to our school and portraying our campus. It’s our actual university having these hate groups in our school. The majority of it was we saw one of our teammates doing it and we didn’t want him to be alone.”