Boil water notice to remain in effect through Wednesday 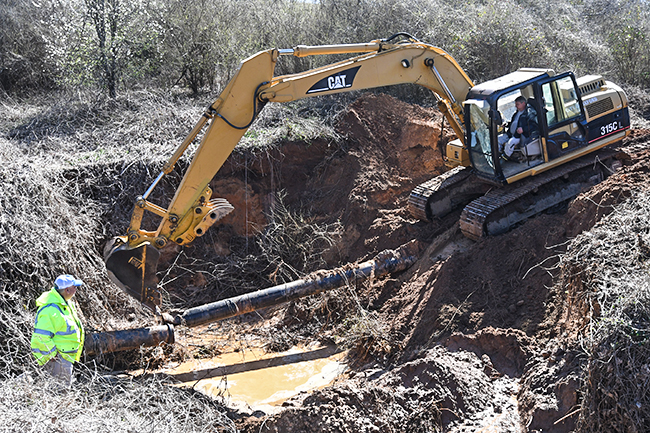 A city work crew begins the process of repairing a broken 12-inch water main located behind Urgent Care adjacent to Highway 7 in Oxford, Miss. on Sunday, February 24, 2019. The pipe was damaged as a result of heavy rainfall that has affected the area the past week. The city has turned the water back on at this time, but until the system equalized will not be able to say with certainty that the issue is completely fixed, according to the City of Oxford Facebook page. (Bruce Newman, Oxford Eagle via AP)

Oxford Water System customers will need to continue taking precautions with their tap water for a couple more days. The boil-water notice that was put into affect on Saturday remains in affect through at least Wednesday, according to Mayor Robyn Tannehill.

Several water mains broke over the weekend due to the large amount of heavy rainfall Oxford received last week. The first break was discovered early Saturday morning near the Max Hipp Industrial Park, prompting the city to initiate the notice. A second break was found behind the Urgent Care center off Highway 7 on Sunday morning.

By Sunday afternoon water pressure returned to most parts of Oxford and water samples were sent to the Mississippi Department of Health on Monday.

Tannehill provided an update through her Facebook page on Sunday afternoon.

“We are scheduled to deliver the samples to the Mississippi Department of Health (Monday) morning at 10 am. Results typically take 48 hours,” Tannehill’s post read. “We are probably looking at Wednesday before the Boil Water Notice is removed.”

Portions of Ole Miss’ campus are also affected by the city’s notice. The Gertrude C. Ford Center, Rowan Oak, University Museum, South Oxford Center, Carriage House, Memory House, Walton-Young House, Jackson Avenue Center, Music Building and the Grisham House are all adhering to the boil-water notice until it is lifted by the city.

City crews have located and are repairing a break