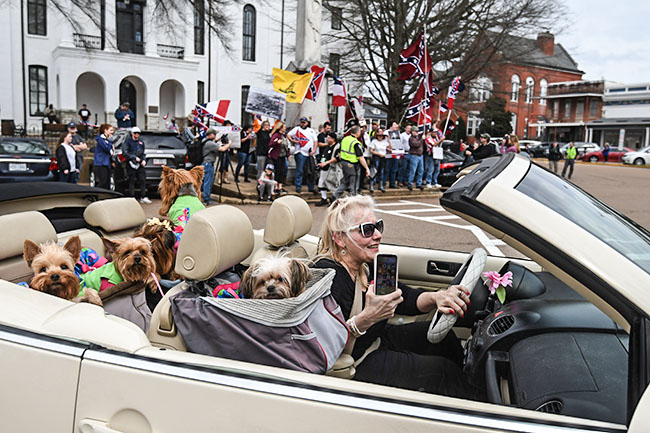 After a weekend that began with torrential rains and ended with pro-Confederate rally through the city Saturday, Mayor Robyn Tannehill lauded Oxford Police Department for how it responded to its challenges.

Tannehill also said she was proud of OPD for planning and executing its plan to ensure the rally was able to march from the square to the University of Mississippi’s campus.

“Our community demonstrated that allowing freedom of expression obviously is not an endorsement of divisive speech,” the mayor said. “The city of Oxford cannot prevent protest based on content of speech or beliefs. and allowing these protests to take place I think shows that we can have a demonstration of freedom of speech and also provide great public safety and respect.”

The rally began at 1 p.m. on the Square and began to march to the second Confederate monument just after 2 p.m. When the rally arrived at the second monument at about 2:30, they were allowed to stay on the university grounds for an hour until 3:30 p.m.

The rally didn’t go without response, however, as eight Ole Miss men’s basketball players knelt during the national anthem in protest of the pro-Confederate group’s march through campus.

“We’re just tired of these hate groups coming to our school and portraying our campus,” Ole Miss player Breein Tyree said. “We saw one of our teammates doing it and we didn’t want him to be alone.”

In preparation for the rally, all three law enforcement bodies, the Lafayette County Sheriff, UM police and OPD, signed an agreement to allow each body to share officers in case of an emergency last week.

No emergency occurred, and Tannehill said she saw one media outlet describe the rally as “anticlimactic.” To that, Tannehill said “mission accomplished.”

“The amazing professionals that work for the officer or police department really just have our utmost respect on how they handled all the public safety issues over the past week,” Tannehill said. “The city of Oxford has taken the events of the past week very seriously, maybe more seriously than the public knew.”