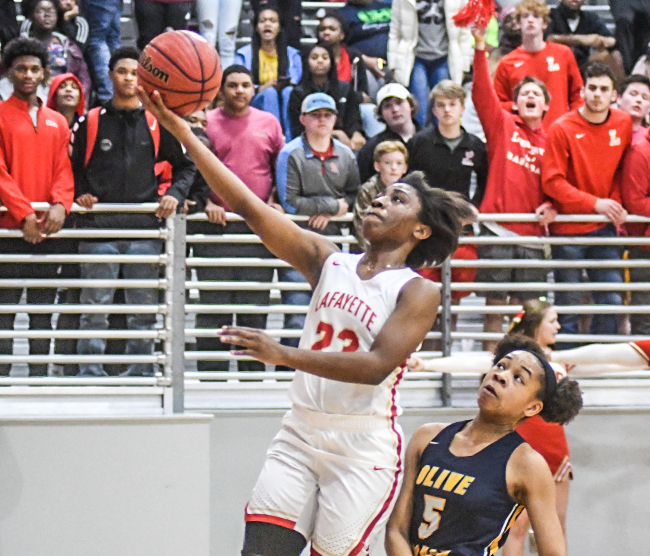 OXFORD – Lafayette’s girls (27-4) saw their season end in their home gym Monday night, losing to Olive Branch (27-4) in the Class 5A State Playoff quarterfinals by a score of 62-37. The style of defense employed by the Conquistadors proved to be the rare thing the Lady Commodores simply couldn’t conquer this season.

“I’m proud of the way the girls played. Effort and energy was never an issue for us tonight,” said Lafayette head coach Shane Linzy. “It was unforced errors and decision making we struggled with that led to the outcome.”

Olive Branch opened the game with a full-court press on the Lady Commodores. They would open up a quick 11-4 lead before a handful of good defensive possessions allowed Lafayette to crawl back and tie the game at 11. However, Olive Branch would score eight unanswered to end the quarter up 19-11, capitalized by a shot from just inside half-court that banked in. They followed up the run by scoring the first eight points of the second half, leading 36-18 at intermission.

“We’re in the ballgame and then she hits the buzzer beater. It was definitely a little deflating,” Linzy said. “They come to the huddle and I just had to tell the girls ‘It’s okay. It’s okay.'”

Both teams slowed down the pace for the second half. The Conquistadors reduced their pressure in the second from a full-court to a half-court trap. It later became a base 2-3 zone. However, without a shot clock in high school basketball, Olive Branch was able to milk seven or ten seconds off the clock with the start of as many possessions as they wanted.

Scoring over the final 16 minutes was closer, yet insignificant. The shifting defense did nothing for the outcome, as Lafayette unable to ever put any sort of pressure on Olive Branch. The Conquistador lead was 26 after three quarters and 25 by final buzzer.

“I thought they played hard in the second half. I just asked them to give us everything they had,” Linzy said. “There’s no 20 point shot on the floor. I thought we did a better job of taking it possession by possession. But we couldn’t keep up with them offensively.”

The Olive Branch pressure defense got in the Commodore’s heads early. The team that was averaging 57.8 points per game was held to just 37 points. Turnovers were a big part of the pressure equation – the Commodores had over 20 of them. They committed an incredibly high amount of out-of-character, reckless passes. Not only did these turnovers end possessions, but they led to uncontested Olive Branch layups on the other end.

“We had a lot of self-inflicted turnovers. They get after you defensively,” Linzy said. “They’re not doing anything they can’t do well. We had way too many unforced errors. It’s something we talked about a lot the last couple games and we couldn’t take care of the ball.”

It’s a disappointing end to what was a fantastic season for Lafayette. Losing in the semifinals last season, this team had its eyes set on a return to Jackson in 2019. They fell fell one game shy of a return trip.