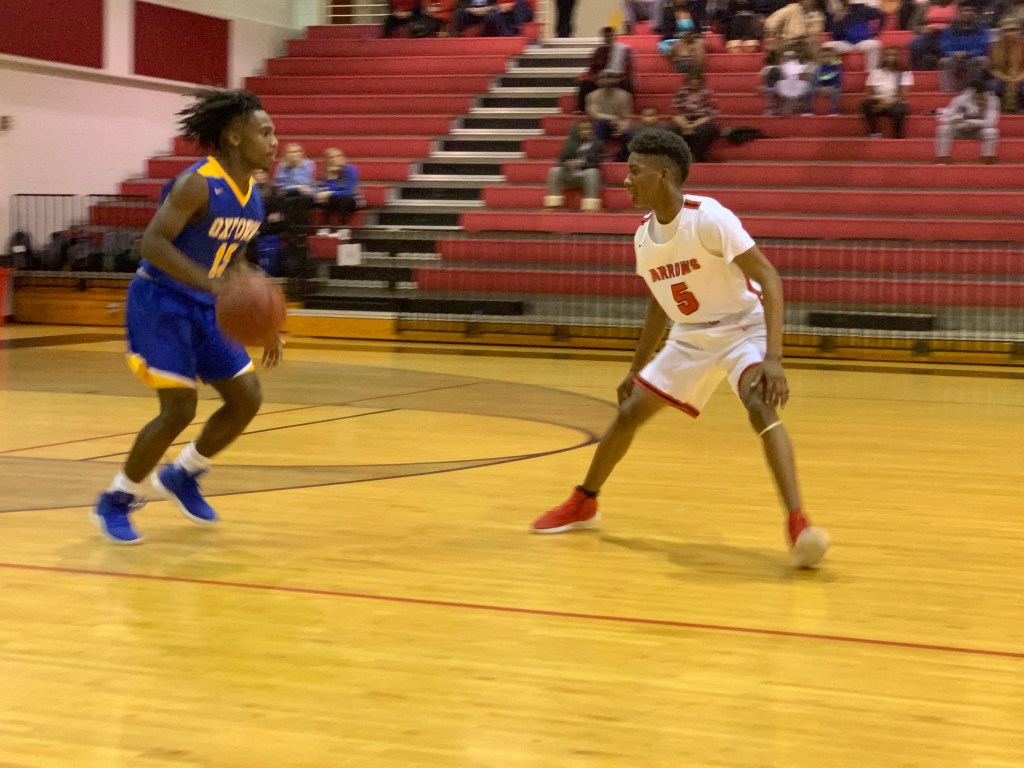 By Ben Mikell
Special to the Eagle

CLINTON – For much of the season, the Oxford Chargers (24-6) haven’t won close games. A lack of mental toughness and the ability to make late free throws have doomed the Chargers in the past. Monday night in the second round of the Class 6A State Playoff against the Clinton Arrows (20-10), they were able to flip the script.

“(Assistant) Coach (Tyler) Reed and I stressed it to them preseason, the first season, second season, and now what we call the third season, the playoffs,” said Oxford head coach Drew Tyler. “It’s just about being tough down the stretch being able to win close games. It was a close game for 32 minutes. A possession here or there could equal to a win or a loss.”
The second round game was a see-saw battle; the lead changed just about every couple of minutes. After one quarter, it was the Chargers with a one point advantage, but by halftime Clinton managed to hold a 27-26 lead.
Fast forward to the end of the fourth quarter.
With a game tied at 50 with just 18 seconds left, Clinton’s Quandarius Studaway went to the free throw line for a chance to put the pressure on Oxford. He missed both and Tyler called a timeout for Oxford.
Coming out of the timeout, Tyler drew up a play that led Byron Pearson drove the lane. He drew a foul to go to the line with just one second left. Pearson sank both, effectively icing the game. Final: 52-50 Oxford
Junior big man J.J. Pegues was a monster in Clinton. In reality, Pearson had a shot at those game-winning free throws because of Pegues’ heroics earlier. He finished with 15 points, all scored in the second half, 14 rebounds, four assists, six steals, and took three charges. Pegues played most of the second half with three fouls.
“I think J.J. has proven to all coaches across all sports in this high school and at the collegiate level that he is a winning athlete. He can title himself as a football and basketball player,” Tyler said. “Pegues is one of the best in the state of Mississippi on the basketball court and the football field. He had a beast of a game and he is doing it at the right time.”
Tykel Owens led the Chargers with 17 points before fouling out early in the fourth quarter. Kylan Blackmon added 11. Kolby Moore led Clinton with 17 points. Studaway had 15 points and Tyshwan Armstrong chipped in 10.
Oxford will travel to Starkville Thursday night in the quarterfinal round of the 6A playoffs for a trip to Jackson.