Heartbreak at the buzzer as Rebels drop nail-biter to No. 7 Tennessee 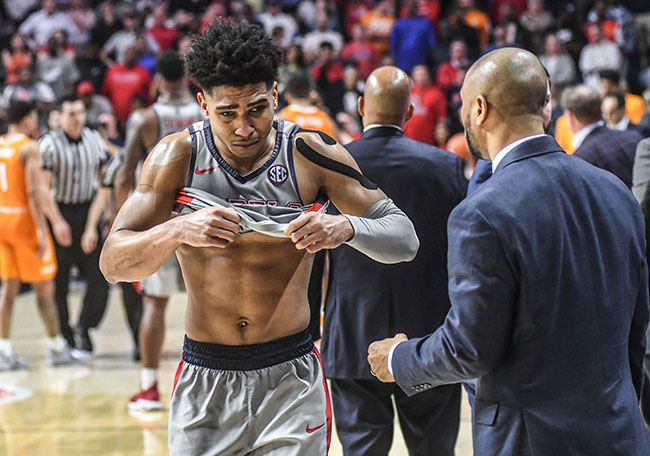 OXFORD – A pair of late-game sequences doomed Ole Miss against one of the better teams in the nation. In front of a sold-out Pavilion against the No. 7 team in the nation, Kermit Davis’ Rebels played one of their best games of the year, but it wasn’t enough. Ole Miss lost at home to Tennessee 73-71, falling to 9-6 in SEC play.

“I thought it was two NCAA Tournament teams that sure acted and played like it,” said Ole Miss head coach Kermit Davis. “Our team just stayed together and showed so much toughness. They ran great offenses. Tennessee, they’re very good and so efficient offensively. He made a tough shot at the end to go up one. It’s just one of those games.”

Tennessee took a comfortable lead early, silencing the rumpus Pavilion crowd. Growing sense was they might run the Rebels out of their own building. Then Terence Davis happened.

Davis stole a Volunteer pass that went out towards the wing, resulting in a two on one break in Ole Miss’ favor. Instead of dumping it off to the other Rebel player for a layup, Terence took the ball right at Tennessee defender, 6-foot-6 Yves Pons and dunked it right in his face. Pons was called for a foul after getting put on a 16×20 poster for Terence Davis to hang by his bedside.

“I’d bet you 1,000 dollars he wasn’t (passing) that one back. That was a great play. That was a special play,” Kermit Davis said, laughing. “And the arena, I’d like to mention how loud that place was on that particular play. TD’s had a few of those in his career.”

It’s truly remarkable how much that one dunk changed the mood of the game. Davis hit a three pointer on the next possession. All of a sudden Ole Miss was right back in it. The Rebels slowly crawled back the final ten minutes of the half, eventually tying it at 25 before taking their first lead at 28-27 with 4:18 left. By half’s end, the Rebels held a 39-34 lead on the No. 7 team in the nation.

Tennessee’s veteran composure really showed early on in the second half. They came right out of the gate, scoring 14 of the first 16 points of the second period. Trailing by as many as seven early, Ole Miss did just what they did in the first – they slowly crawled back. A sequence of a pretty Breein Tyree driving layup followed by a corner three by Terence Davis give the Rebels the lead again at 58-57 with ten to play.

A three by Breein Tyree with 2:40 remaining brought everyone in the Pavilion to their feet, giving the Rebels the lead at 69-67.

This is without a doubt the loudest the Pavilion has been on the year. This followed a Tyree three to put #OleMiss up 69-67 pic.twitter.com/adiaJqBXAd

Ole Miss made 14 of 15 free throws on the night, but it was the one they missed that hurt the most. Tyree was fouled with 18 seconds left and missed the front-end of the one-and-one. Tennessee’s Grant Williams hit the bucket on the other end to go up 72-71 with 4.4 seconds to go.

Ole Miss sophomore Devontae Shuler had a look at a long three to win the game at the buzzer. Shuler would lose control around half court, running right into the Admiral Schofield. He was called with a charge, effectively ending the game. Referees called Kermit Davis with a technical foul after throwing his jacket following the call, but that extra Tennessee point was merely a cap on a game that was already over.

“(The call) was close. It was close. Our fans were unbelievable, and I shouldn’t have acted the way I did. Just being competitive in the moment,” Davis said. “I’m not sure Rick (Barnes) would’ve wanted Schofield to try and take a charge in that moment. That’s a risky play; it just is.”

This was just called a charge. Essentially ending the game.

In reality, this was beautiful college basketball game played at its highest level. The two teams combined to go 26 for 31 from the free throw line and committed only 19 total turnovers. Despite the outcome, it was one of the best games of basketball Kermit Davis’ squad has played all year.

“I thought both teams just played their hearts out. You’d expect that at this time of year,” said Tennessee head coach Rick Barnes. “Kermit has done a terrific job this year with this team. It was a great atmosphere and a great crowd, but we’ve kind of dealt with that all year.”

The Rebels return to action Saturday with a road game at Arkansas. A noon tipoff, the game is televised on SEC Network.

High School tennis teams get wins to start the…