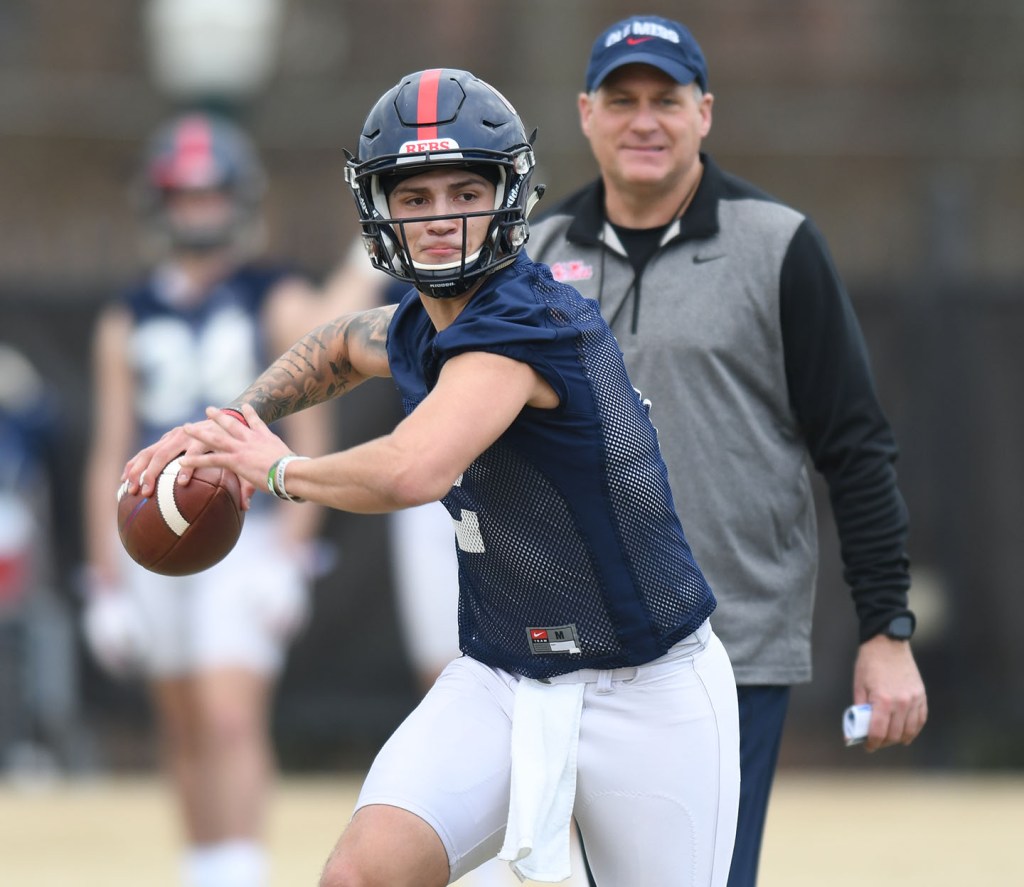 OXFORD – The layoff is never all that long – football is back. Ole Miss opened spring practices this week with a lot of new faces both on the coaching staff and on the field. Matt Luke may still be at the helm, but this Rebel team looks quite a bit different than years past.

As anyone that even remotely follows the program knows, Ole Miss has a lot to replace entering the 2019 season. Just on the offensive side of the ball, the Rebels will lose their quarterback, top three receivers and four contributing offensive linemen. All this and they’re also installing a completely new offense and defense with new coordinators Rich Rodriguez and Mike MacIntyre in the building.

“It’s exciting to get that new, fresh start. We’re installing a new offense and a new defense. I think the guys are excited about learning the system,” Luke said. “They’re excited about coach MacIntyre, excited about Rich Rod. A lot of energy is in the building, a lot of excitement. We’re ready to get started.”

Rich Rod’s offense for Ole Miss already looks wildly divergent of what Phil Longo ran, something that shouldn’t come as a surprise. His system emphasizes the threat of a quarterback running the football. That was evident in Tuesday’s practice as every handoff at least gave the appearance like it may be an option handoff, and the pocket moved for the quarterback regularly.

Here’s what I saw as the #OleMiss first team offense yesterday at the start of spring practice, with a few relevant subs that got some work with the 1s.

Still a longggggg way till the start of the season (and more guys coming in over the summer) #HottyToddy pic.twitter.com/20gf8Y1yHj

Redshirt freshman Matt Corral is solidified as the starting quarterback, but the number-two job behind him is anyone’s for the taking. That said, freshman Grant Tisdale seems to have the leg up. Tisdale comes from an Allen, Texas program that regularly produces some of the best college talent in the country. His ability to run the football is something that fits in really well with the new scheme.

“I think (his skillset) fits really, really well. It’s so important that he’s here mid-year,” Luke said. “Grant is a very, very good thrower. He comes from a great program at Allen. But he’s also a very willing runner. I think he has the ability to do both, and that’s really what we want to do. We still want to be balanced, but with a little bit more emphasis on running the football, especially in the red-zone.”

No program in the country has as much to replace at receiver than Ole Miss. A.J. Brown, D.K. Metcalf and DaMarkus Lodge combined for 176 catches, 2700 yards and 15 touchdowns last year. They’re all gone. Now it’s time for a new crop to step up.

Elijah Moore started in the slot last year after Metcalf went down with an injury. He’ll continue to be that Y receiver. Miles Battle, a four-star freshman from Houston, TX who redshirted last year, and Braylon Sanders, who caught 16 balls and a touchdown as a sophomore, seem in line to start on the outside. However, in Tuesday’s opening practice, Dontario Drummond, Demarcus Gregory and Jadon Jackson also got work at receiver with the first-team offense.

“We got some talented guys. It’s their turn to step up. One of the unique things you see in our receiver room is Dontae Moncrief passing on the work ethic,” Luke said. “It’s kind of gone on down the line, all the way to A.J. (Brown) and D.K. (Metcaf). Now it’s time for a new crop of receivers to step up. I’m really excited.”

While they lose a boatload of production at receiver, Ole Miss also has four offensive lineman to replace from last year. Luke said the right side seems to be locked down with Alex Givens at tackle and Ben Brown at guard, but the left seems to be a work in progress, rotating two spots between three players. Ole Miss signed seven offensive lineman in the offseason, but none were among the seven early enrollees.

“Until those other guys show up, it will definitely be a challenge. But it will also give the opportunity for a lot of guys to get a lot of reps that are needed,” Luke said. “It will definitely be a work in progress. The job is to try to get the five best O-lineman out there. And I think that’s what we’ll use these 15 practices to determine.”

New NCAA rules have allowed the team to participate in more walk-throughs early than previous years. Luke says they’re much further ahead in installing the new schemes because of this. However, there’s nothing like actually being able to practice. They’ll have fifteen full practices in the spring before April’s Grove Bowl.

Rebels facing toughest test to date with No. 7…