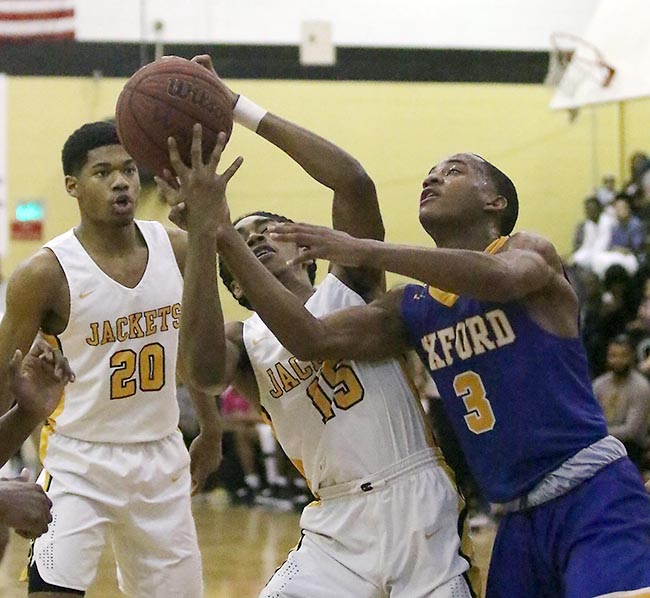 STARKVILLE – Oxford lost a battle of runs Thursday night in Starkville. With their season on the line in the playoff quarterfinals, the Chargers were never able to crawl out of their early deficit, losing to Starkville 79-65.

“There’s a lot of guys in that locker room that are heartbroken,” said Oxford head coach Drew Tyler. “I’m pleased with our effort tonight. We left everything on the battlefield.”

Lights-out three-point shooting was the story to start the game for Starkville. After missing their first two shots, the Yellowjackets went on a blistering run by hitting their next seven shots from beyond the arc. It was an offensive pace the Chargers simply couldn’t match, as they ended the first period of play down 23-13.

“When you can hit from the perimeter it stretches the defense. So our defense was really stretched. But at the same time they’re quick enough to get by you. It’s a double-edged sword,” Tyler said.

Despite hot shooting, it wasn’t the cleanest offensive game for Starkville. They turned the ball over a number of times early in the second quarter. Oxford simply wasn’t able to capitalize on it on the other end, missing a myriad of shots at the rim early in the quarter.

A Kylan Blackmon corner three would cut the lead to five with 4:23 to play in the quarter. They would draw a charge and then hit two free throws on the other end to cut the lead to three, before a technical foul called on Oxford assistant coach Tyler Reed ended the Oxford run.

Regardless of the runs, Starkville never flinched when Oxford brought it close. Tykel Owens hit a gorgeous spinning layup, cutting the lead to as little as two, but it wouldn’t get closer. Starkville scored 11 of the final 12 points of the quarter to take a 37-25 lead to halftime.

Oxford started the second half on a tear behind the hot hand of junior forward J.J. Pegues. Despite Pegues’ size – he’s listed at 6-foot-4 and 240-pounds – it was his three-point shooting that kept the Chargers alive at times. He hit 4 straight three-point attempts to start the third quarter to cut the lead to 41-38. However, the Yellowjackets answered, going on a 15-3 run of their own to go up 56-41.

“J.J. has shown throughout the year that he can play on the perimeter,” Tyler said. “He’s very deceiving. When you look at J.J., you don’t think he can move as well as he can. He uses that to his advantage.”

Unlike the prior two quarters when Oxford was able to crawl back and make a run, the fourth was relatively uneventful. Another Pegues three cut the lead to nine with 1:30 to play, but the outcome was really never in doubt. Starkville hung on to win 79-65.

Pegues’ 30 points led Oxford. He also grabbed 7 rebounds. He was also a force on both the offensive and defensive glass, the only Charger to really bother Starkville in this game on either end of the floor.

Ultimately, it was an impressive playoff run for an Oxford team that went 3-4 in its own district on the year. They’ll end the season with a 24-7 record and playoff quarterfinal run.