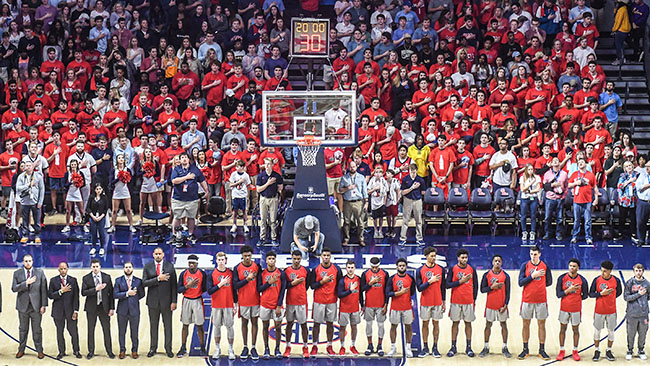 Ole Miss players and coaches stand for the National Anthem before the game against Tennessee at the Pavilion at Ole Miss, in Oxford, Miss. on Wednesday, February 27, 2019. (Bruce Newman, Oxford Eagle via AP)

OXFORD – Plenty of national media arrived in Oxford on Wednesday. Not only was Ole Miss playing its toughest test to date on the court in No. 7 Tennessee, but after Saturday’s protest brought national attention, Ole Miss had questions to answer.

“We always support our players. I know what happened Saturday wasn’t about the anthem, it was about what was going on, on our campus,” said head coach Kermit Davis. “I thought when our guys knelt, we supported our players. We know it was nothing to do with anything except the hate groups that were on our campus.”

Every Ole Miss player and coach stood for the anthem against Tennessee, after kneeling last Saturday against Georgia. It was clear from the start what Davis’ message was on the matter: it was a one-time event. He said a version of those words four or five time while addressing the media.

Following Saturday’s demonstration, the Rebels were all over ESPN. Sports and news outlets were covering them extensively from columns to radio shows. You name it, the Rebels’ protest was discussed there. Leading up to the telecast of the game, the story wasn’t about how this very good Ole Miss team was about to play their biggest game of the year. The pregame was just one question: would the Rebels kneel again?

“I didn’t think there were any distractions. I thought these guys handled it well. It was a one-time incident about something that was happening 250-yards from our arena,” Davis said. “It was a one-time thing and obviously by the way we played it wasn’t a distraction at all.”

Players emphasized that they felt support after the demonstration, both on campus from other students and from administration. However, their message was similar to Davis’.

“It won’t happen again; it won’t happen,” Bruce Stevens said, confidently. “It was just a one-day thing. I was with Devontae Shuler. We’re just going to move on and worry about basketball. We’re not really worried about that anymore.”

Time will tell if this message is to hold true, but it seems like for now, the kneeling is behind Ole Miss.