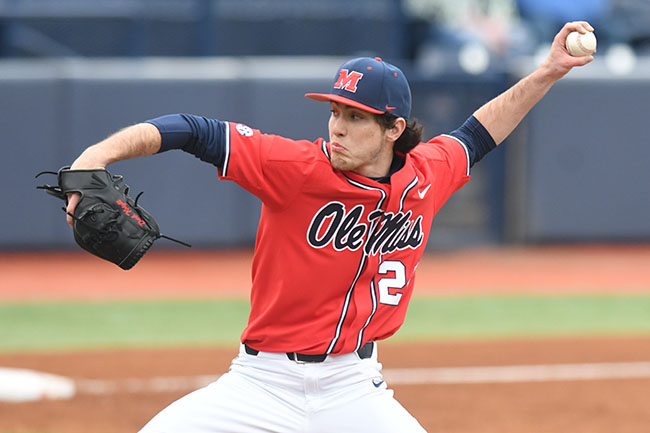 It is hardly breaking news that Ole Miss has struggled to pitch through seven games to open the 2019 season. With a 5-2 record entering a home series against 0-7 Long Beach State, that’s one of the questions the Ole Miss team looks to find answers for against a struggling Dirtbags squad.

Will Ethridge should be in line to start for the Rebels Friday, after missing a week dealing with a blister on a finger on his throwing hand. Ethridge has only made one start but is hands down the most consistent pitcher the Rebels have. He allowed no earned runs in 5.2 innings of work in his lone start.

The other relatively solidified rotation spot seems to be true freshman Gunner Hoglund on Sunday. Hoglund’s numbers aren’t pretty; in two starts he has an ERA of 6.0 in just 6.0 innings of work. However, he’s improving enough to keep him in there.

Hoglund allowed three runs in just two innings against Arkansas State in his first start before going four innings and allowing just one earned against Tulane last weekend. He gave up eight hits to Tulane but showed good poise to be able to work out of jams with runners on.

The biggest question mark for the Rebels is what to do on Saturdays. Mike Bianco slated Zach Phillips in that role from the start, but he has really struggled. With a 10.29 ERA through seven innings, Phillips is last on the team in in runs and hits allowed. Interestingly, he hasn’t given up a single home run – just a lot of paper cuts leading to bigger issues.

It’s assumed that Mike Bianco won’t pull the plug on the junior college transfer just yet. However, if he continues to struggle against a Long Beach team that’s struggled to put runs on the board he’s going to get moved to the bullpen pretty fast.

An interesting name to keep an eye on is freshman Doug Nikhazy from Windermere, Fla. Outside of Ethridge, Nikhazy may be the most impressive Rebel through seven games. In three appearances, Nikhazy has thrown 3.1 innings, allowing no earned runs and four hits. It’s likely he’ll get a chance to start at some point if this impressive run continues.

Another question mark for the Rebels has been who to play in the outfield. The only name that’s solidified is that of Ryan Olenek, although he’s been playing both center and right field. Thomas Dillard seems to be set at left field when he’s not taking the occasional start at catcher. Six different Rebels have started in outfield on the year.

Second baseman Anthony Servideo started twice in outfield at Tulane. Honestly, he may be the best defensive outfielder Ole Miss has. However, he’s so good defensively at second base that they have to weight whether losing him in the middle of the infield is worth the boost in the outfield.

The series against Long Beach State comes at a valuable time for Ole Miss. At 0-7, the Dirtbags have scored just 10 runs total on the season. It should be a good chance for the pitching staff to get back under control and maybe for defensive outfielders to show themselves as the solution.