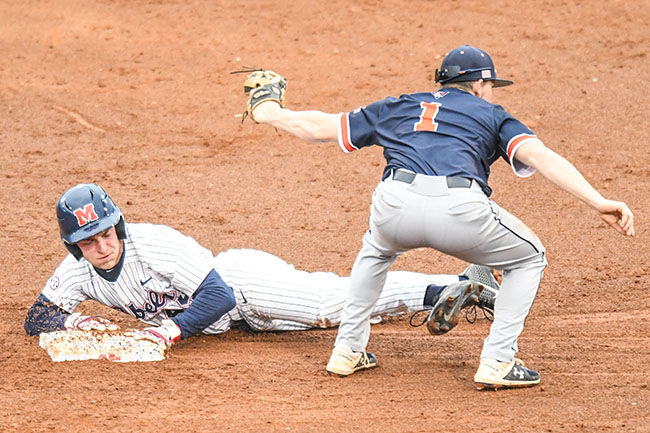 Mississippi's Carl Gindl (44) steals second as Tennessee-Martin's Billy Edwards (1) takes the throw at Oxford-University Stadium in Oxford, Miss. on Tuesday, February 26, 2019. Gindl would score from second base on a fly ball out to centerfield. (Bruce Newman, Oxford Eagle via AP)

Due to inclement weather in the forecast on Sunday, Ole Miss baseball and Long Beach State will conclude their three-game series with a doubleheader Saturday, starting at 1:30 p.m. CT.

Friday night’s game will be held as scheduled at 6:30 p.m. CT, as will the first game of the doubleheader at 1:30 p.m. CT Saturday. The final game of the series will start 45 minutes after the conclusion of Game 2.

Season-ticket holders and single-game purchasers will use Saturday’s ticket, (Game 07), for Saturday afternoon’s game at 1:30 p.m. Gates will open at 11:30 a.m. The stadium will not be cleared between games.

If season-ticket holders wish to attend only one of the games during the doubleheader but would like to give their tickets away for the second game (or vice versa), please turn the used tickets into the Ticket Office outside of the stadium so that they may be reprinted for you or your guests and left at Will Call for pick up.

How Rebels have tried handling concerns leading into Long…