Position and scheme changes: a look at the new Ole Miss defense as spring ball opens 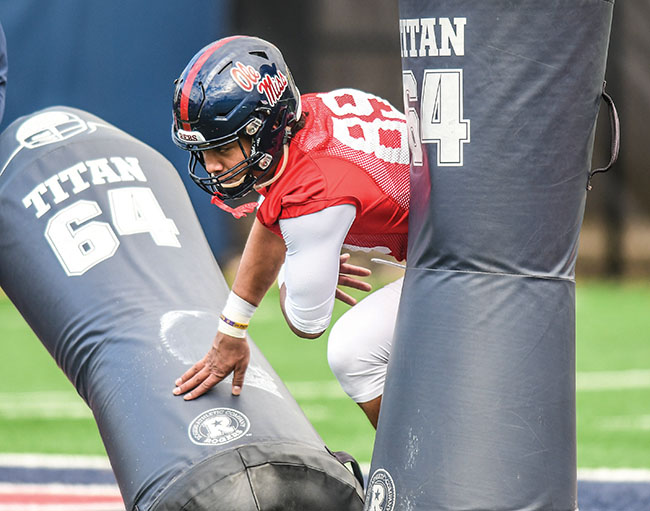 OXFORD – With spring football now through week one, the Ole Miss offense isn’t the only unit that’s going to look very different in 2019. Like the offense under Rich Rodriguez, the Rebel defense, now led by Mike MacIntyre, is undergoing a complete scheme overhaul over the spring.

Bringing in Mike MacIntyre in January brought with it an understood switch to a 3-4 defense. MacIntrye spent 2003-2006 coaching defensive backs with the Dallas Cowboys under Bill Parcells, one of the people who ‘modernized’ the 3-4 defense when he had Lawrence Taylor on the New York Giants.

MacIntyre’s 3-4 college defense will look substantially different than that of any 2000’s NFL scheme. However, it’s also going to be a stark difference from what the Ole Miss defense looked like under Wesley McGriff.

“It’s definitely early, but so far they’ve picked it up really well. Coach Tyrone Nix has done a good job with them,” MacIntyre said, talking about players making that transition. “They’re doing a good job at it.”

Benito Jones will likely get a good look at that nose tackle position, but he’s among a handful of Rebels that are out for the spring with injury. MacIntyre expects Jones to potentially be able to return to full practice after spring break.

It takes time for these players to get used to the ins and outs of a new playbook. Add that to the fact that some players are adjusting not just to a new playbook, but also a position change, and things could take time for this unit. MacIntyre admitted that they don’t have a whole lot of plays installed yet. However, he added that “sometimes if you don’t play a whole lot of things on defense, but you’re really good at what you do, that helps.”

Walk-throughs are one thing, but there’s nothing for a new unit like playing live-action football. These next few weeks allows the new Ole Miss defense to do just that. Additionally, this defense will get a benefit of playing against a Rich Rod offense that gives multiple different looks all throughout spring ball.

“Offenses have gotten a little more complicated. They spread you out, they play fast and have all these different formations and moving parts. That makes it tough on us,” MacIntyre said.  “But going against our offense, with what Rich (Rodriguez) does and how he attacks you in all different ways and spreads it all over the field and has different sets. That’s helped us adapt a little quicker, I think. So far, I think they’ve done well with it.”

How Rebels have tried handling concerns leading into Long…