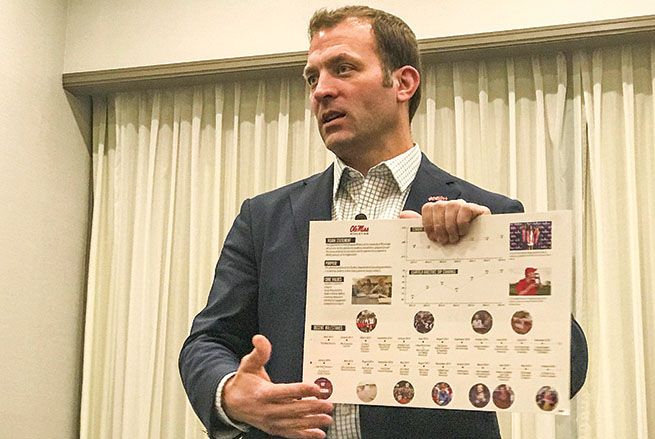 If Ross Bjork had to describe the last three weeks he spent traversing Mississippi and speaking with the Ole Miss fan base he would use the word ‘healthy.’ On Thursday Bjork wrapped his one-man town hall series where he visited seven towns across the state and Memphis to allow people to ask whatever they wanted or to simple vent frustrations over the NCAA investigation among other topics.

“From out standpoint they’ve been very, very positive,” Bjork said ahead of Thursday’s meeting. “As we wrap up the evening and have one-on-one interactions with people they’re walking up and saying ‘thank you. I needed this.’ …I’m sure some people are walking out going ‘hey, I still disagree,’ but hopefully they still respect the fact that we’re looking people in the eye and just answering questions directly.”

The idea of doing a town hall was announced in November with the dates and locations of the meeting revealed in January. With the NCAA case essentially past Ole Miss and new coaches in place in the football and basketball programs, Bjork felt this was the right time to hit the road and address alumni and supporters face-to-face.

The final stop of the series took place at the Memphis Hilton with around 50 people in attendance. As with each stop prior, Bjork opened up the 90-minute session with an introduction. He explained the purpose of the town hall and even went nearly step-by-step through the NCAA investigation using a big information card that had a flow chart, highlighting all the key steps of the six-year investigation.

From there he opened it up for questions and the next hour consisted of topics ranging from the NCAA investigation, the events surrounding last weekend’s confederate rally and the kneeling by some of the players on the men’s basketball team. Bjork even fielded questions regarding how students storm right field to set up their chairs ahead of baseball season.

Former football head coach Hugh Freeze was a brief topic, including Ole Miss’ impending home game against Liberty on Nov. 13, 2021 which Bjork said they are ‘considering all options’ regarding the status of the game.

This is how Bjork wanted the town halls to be; open and transparent. He had no intention of ducking or hiding from questions he was asked on Thursday and answered each one with brutal honesty at times.

“I would say for the most part the subject matter, the topics have been predicted,” Bjork said. “We knew people would ask about the NCAA case, perhaps about football. The student section has been a topic, but obviously this week things shifted with what happened last Saturday.”

During Monday’s Tupelo stop Bjork addressed the events that happened in Oxford with the pro-confederate rally and at the basketball game in his opening comments. After Bjork’s opening statement he noted there were not any questions throughout the night about the events, though one question about the public relations aspect. On Thursday he chose to not address it in his opening statements but a couple questions were asked.

One person gave a comment, feeling the university did not do enough to address the rally taking place on campus ahead of the game.

The turnout for each town hall was not massive but those who wanted to come, did. One man drove from Birmingham, Alabama to Tupelo on Monday.

A future plan for more meetings is not known at this time but when asked if more would take place Bjork answered by saying they are going to look at the model and see if there needs to be a change to how they did these initial seven. Several options were thrown out, including holding one ahead of every home football game, as Notre Dame athletic director Jack Swarbrick does.

“We’re going to look at some of those things to maybe do something like this,” Bjork said. “Where it’s not the ‘rah-rah.’ It’s business and specific questions. I think it can be healthy moving forward.”