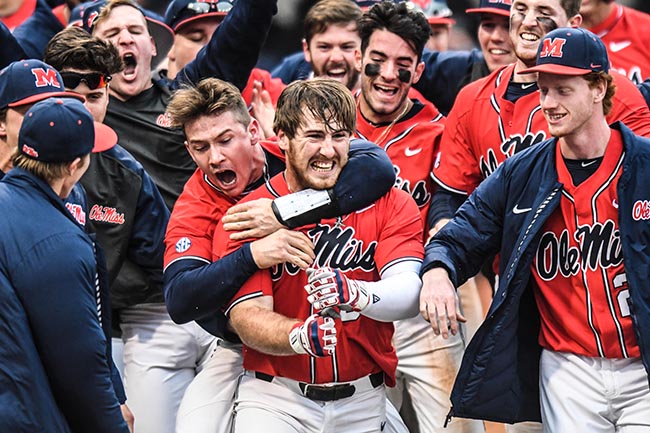 Mississippi's Thomas Dillard, right, is mobbed by Cooper Johnson, left, and the rest of his teammates following his walk-off home run against Long Beach State at Oxford-University Stadium in Oxford, Miss. on Saturday, March 2, 2019. Mississippi won 7-6 in game 1 of a doubleheader. (Bruce Newman, Oxford Eagle via AP)

OXFORD – Ole Miss needed more heroics from Thomas Dillard Saturday afternoon. With game one of the doubleheader tied at 6 entering the final frame, Dillard did what Dillard’s been doing all year. He went long. His walk-off home run led the Rebels to a 7-6 win, keeping Long Beach State winless at 0-9.

A game that appeared to be a pitchers duel for much of the opening six frames, Long Beach held a 2-1 lead heading into the bottom of the seventh inning. Ten more runs would be scored from that point on. Ole Miss tacked on three runs in the bottom of the seventh, in large part thanks to a two-RBI double by Tyler Keenan before things started looking bleak.

Parker Caracci’s eighth inning did not go as planned. Despite getting his velocity up to 92-93 miles-per-hour, he struggled locating his fastball. Caracci walked three of the first four batters he faced before getting pulled. His final line: only 0.1 innings, three walks and three earned runs.

Freshman Doug Nikhazy replaced Caracci in the eighth. Nikhazy gave up a double to his first batter faced and a looping single to left center to the second batter. Just like that, LBSU tacked on four runs. Nikhazy would get out of the inning by getting his third batter faced to ground into a double play.

The four runs Long Beach scored in the eighth inning topped anything they had scored in an entire game on the year. At 0-8 entering the game, it’s a team that’s struggled mightily just to score runs.

As they’re prone to do, the Rebels closed their two-run hole quickly. Cooper Johnson scored on an Anthony Servideo single to get it within one in the bottom of the eighth. The next batter, Grae Kessinger, grounded into a fielder’s choice to score Josh Hall, tying the game at 6.

“We had some drought’s in the middle inning. It’s tough. The offense is never out of it. They always feel like they can score runs,” said head coach Mike Bianco. “It’s coming from a lot of different people.”

Long Beach threatened in the top half of the ninth. With the bases loaded and one out, an errant Nikhazy pitch got by Cooper Johnson to the backstop. Johnson got a good jump on the wild pitch to throw out the runner at home, ending the threat.

In what should have been a predictable ending, Ole Miss’ best bat of the year continued to stay hot. Thomas Dillard took a high fastball deep to right-center, a walk-off homer. His only hit of the day, Dillard is now batting .425 with 6 home runs and 18 RBIs.

Zack Phillips’ five innings pitched from the starting role was without a doubt his best outing on the year. Phillips allowed one run on four hits and two walks. His command looked better than his prior two starts.

“It’s unfortunate (he) didn’t get the win. Probably the best outing for him,” Bianco said. “There’s more in that tank.”

Game 2: Rebels outlast LBSU for the sweep with go-ahead 8th

The Sunday role is all Gunnar Hoglund’s. In his third start on the year, the true freshman shined, showing everyone who stuck around for part two of the doubleheader what impressed the Rebel coaching staff in the fall.

“It was his best outing of the year. I think it’s composure, it’s three pitches in the strike zone,” Bianco said. “He pitched with a lot more confidence today.”

In five innings of work, Hoglund allowed just one run on six hits. He didn’t walk anyone and struck out three. Hoglund’s control was really impressive, throwing just 22 balls in five innings.

It was another true freshman than broke things open for the Rebels in the bottom of the eighth. After walking the bases loaded, Dirtbag pitcher John Sheaks gave up the go-ahead run to Justin Bench. The 2-RBI single was Bench’s first career hit.

“It was almost a storybook ending to the day,” Dillard said. “You just expected him to do it. He’s one of the freshman that just has a ton of poise. He’s just been waiting for his opportunity to do it and he just came up big there in that situation.”

Taylor Broadway notched the win for Ole Miss, pitching the final three innings, allowing just one hit. The Rebels won 5-3 to take their season record to 8-2. After getting swept, Long Beach State leaves Oxford 0-10 on the year.