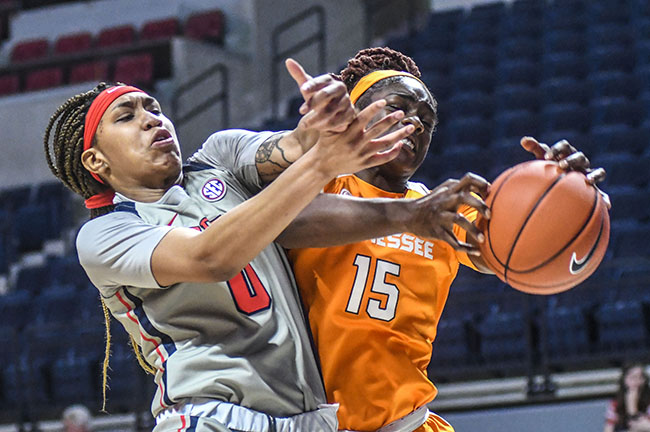 Mississippi's Gabby Crawford (0) and Tennessee's Cheridene Green (15) go for a rebound at the Pavilion at Ole Miss in Oxford, Miss. on Sunday, March 3, 2019. (Bruce Newman, Oxford Eagle via AP)

Sunday’s game was the final one inside The Pavilion for Ole Miss this season and was also Senior Night for five players. The afternoon began with celebration but ended with Tennessee leaving with a 81-56 victory.

The first eight minutes went smoothly for the Rebels (9-21, 3-13 Southeastern Conference) but a surge by Tennessee (18-11, 7-9) to close out the first half changed the complexity of the game.

Leading 13-10 late in the first quarter, the Rebels were unable to keep Tennessee at bay, as the Lady Volunteers went on a 33-6 run in a 12-minute span.

“I don’t think we played well form the beginning of the game,” Ole Miss coach Yolette McPhee-McCuin said. “It did not feel good to me from the beginning. It felt like it was a fight, even when we held the lead. We didn’t have the same gusto. We didn’t move with the level we needed to move, with the intensity we needed to play with. There was nothing there.”

Crystal Allen closed the book on her home career as a Rebel, scoring a game-high 30 points. It is the second highest point total for Allen as a Rebel and a season-high for points scored in a conference game. Freshman Gabby Crawford scored a career-high 16 points to go with 9 rebounds.

Improving off last year’s 1-win season in conference play, the Rebels had the 12-seed in next week’s SEC Tournament secured ahead of Sunday’s game. They will play No. 13-seed Florida in the first game of the tournament at 10 a.m. CT on Wednesday. The winner will play No. 5-seed Missouri in the second round on Thursday.

Tennessee snapped a three-game losing streak, concluding the program’s worst regular season since 1975-76, the last season the Lady Volunteers had a sub 20-win regular season. It is the first time in program history they will finish with a losing record in conference play.

“That game for us was nothing except a lot of heart,” Tennessee coach Holly Warlick said. “That’s all we talked about before the game. We didn’t get to talk about (anything) offensively, defensively. We just talked about having personal respect, self-respect and ‘you can control that.’ So, you had a group of young ladies who came out and fought.”