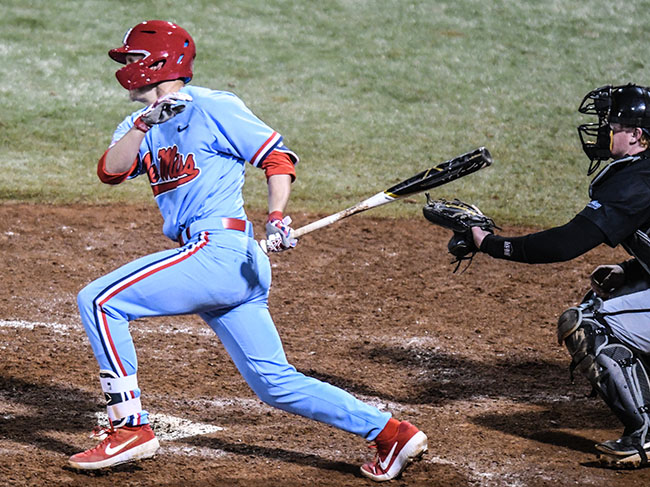 OXFORD – Runs came in many different ways for Ole Miss in their first weekend sweep over Long Beach State. For a team that’s excelled on the year by capitalizing on a series of big innings to overcome pitching struggles, it’s encouraging to be able to change things up when they needed it.

Will Ethridge locked down Friday night in his return from injury – he missed last week’s start with a blister on his throwing hand. In just three innings of work, Ethridge allowed two hits and no runs, Ole Miss winning 7-2.

However, Saturday’s doubleheader was a little different. Ole Miss needed a walk-off home run by Thomas Dillard to win game one and another go-ahead RBI in the eighth inning to win game two. Both games Ole Miss fell behind and had to slowly crawl back in.

“There’s a lot of games where to be good you have to win in different ways. You can’t just be the one-dimensional team that just relies on the home run or just relies on pitching and defense. Hopefully you can do enough of all of that,” said head coach Mike Bianco. “There’s going to be many games where you don’t hit and so you’re going to have to pitch and play defense… today was one of those days that we may look back and say, ‘hey we got a lot better today.’”

Friday night it was pitching and seven singles that won Ole Miss the game. Game one Saturday was a big inning in the eighth to close the gap and a walk-off home run by Thomas Dillard, the best Rebel bat on the year. Game two Saturday was a bit more unique.

With the game tied in the eighth and Ole Miss having not scored since the second inning, Bianco turned to a fresh face with the game on the line. Pinch hitting in the eighth was true freshman Justin Bench. Bench had pinch-hit twice before, going 0-2. With the bases loaded, Bench took a fastball on a line drive to score the two winning runs.

“Probably not many people in the stands knew the name Justin Bench, but I think everyone in the dugout knew he would be successful there,” Bianco said. “He’s just a very mature, calm, slow pulse freshman.”

Over the first seven games, the Rebels hit 15 home runs. In the three-game sweep of Long Beach they hit just one. It’s not a bad thing – it’s just different.

“We had some droughts in the middle innings. It’s tough. When you’re good offensively, everyone’s so critical. But the offense is never out of it. They always feel like they can score runs,” Bianco said. “Fortunately for us (it’s been) in different ways and from different people.”

This week, Ole Miss welcomes their first two-game midweek series and also their toughest competition to date. The Rebels play 2-9 Little Rock on Tuesday at 3 p.m. before No. 18 and 8-4 East Carolina on Wednesday.