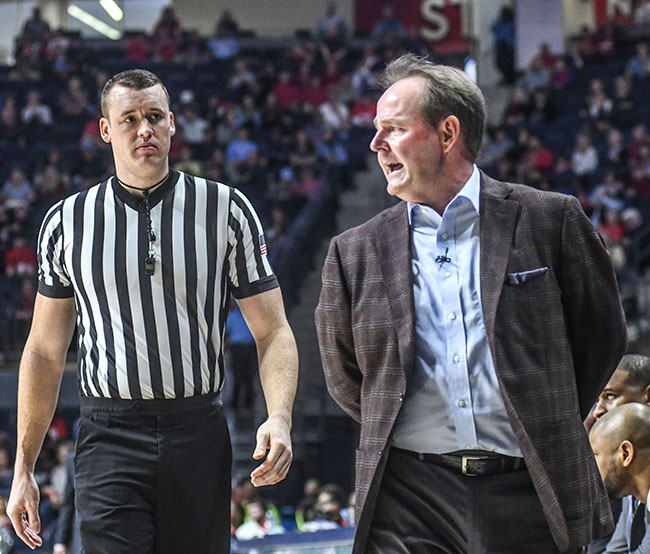 Winning close games at the wire has been at a premium for Rebel basketball the past two weeks. Now losers of three of their last four, the past three Ole Miss games have ended at the buzzer as one score games. With the SEC Tournament starting a week from Wednesday, Kermit Davis’ Rebel squad has just two regular season games remaining to right the ship. The road is far from easy.

Saturday, Ole Miss lost a relatively baffling game at the buzzer. Up 73-72, Breein Tyree turned the ball over with 24-seconds to play, leading to an Arkansas bucket on the other end to take the lead.

With the ball and 5.9-seconds to play, Kermit Davis called a play that led Terence Davis to run off Dominik Olejniczak to get the ball. However, Arkansas covered Davis well and Tyree had to inbound the ball to Olejniczak, who was lost. He held on the ball for far too long before eventually turning it over. Ole Miss didn’t even get the ball past half-court or attempt a shot.

After losing to Tennessee mid-week in similar fashion, a charge being called on the Rebels with less than two seconds left, Kermit Davis described the past few days as a “heartbreaking week.” It’s led him to change up the typical schedule going into a critical stretch.

“I don’t know if, in a long time, two games back-to-back like that, even when I was at Middle Tennessee on the other end of it where teams hit last-second shots to win,” Kermit Davis said. “Our team has been a very good practice team. Yesterday all we did was watch the tape of Arkansas. We didn’t practice. We’re going to come back (Monday). I just thought mentally an extra day would be good for our team.”

Tuesday, Ole Miss hosts the Kentucky Wildcats, looking to put a bow on a conference championship and potentially lock down a one-seed in the NCAA Tournament.

Everyone remembers Kentucky for getting blown out by Duke in November on national TV. However, it’s a team that’s rebounded and is now among the best in the country. At 24-5, Kentucky has lost only two games since Jan. 5 and are still in play for an SEC regular season title and a top-seed in the NCAA Tournament.

It’s a bit different than the Kentucky teams of past starting five freshmen, but the Wildcats still sport a lot of young-blood. Three freshman start for Kentucky, surrounded by sophomore leading scorer P.J. Washington and senior Reid Travis. However, Travis’ status is uncertain – he’s missed three games with a knee sprain and his return is unknown.

The No. 6 Wildcats are one of just five teams ranked in the top-5 of both offense and defense according to Kenpom. Ranked eighth in defense, they’re the best in the conference at that mark, holding teams to just 65.1 points per game.

“I’ve always had such great respect for (John Calipari) and how he gets his guys to defend. They lead our league in defensive field goal percentage in SEC play, points allowed. They’re tough and physical. They’ve got great length,” Davis said. “The one thing about their teams always through the years is the right guy shoots the ball in the right places. It’s amazing how he gets those young guys to do it every year.”

For Kentucky, they’re one game back of Tennessee and LSU for the conference title, something that’s still very much alive. Ole Miss is also fighting for a little something. Not only are they looking to win to solidify their tournament resume, they’re in a five-team tie for fourth place in the conference. The fourth-place team gets a double-bye in the SEC tournament.

“You’ve got a big game for both teams. Kentucky’s still trying to win the (regular season) championship, we’re trying to get a double-bye. I think both teams will kind of be in desperate modes. I think it’s going to be a heckuva environment for college basketball.”

The tip for Kentucky and Ole Miss will be at 8 p.m. from The Pavilion. ESPN will televise the game.