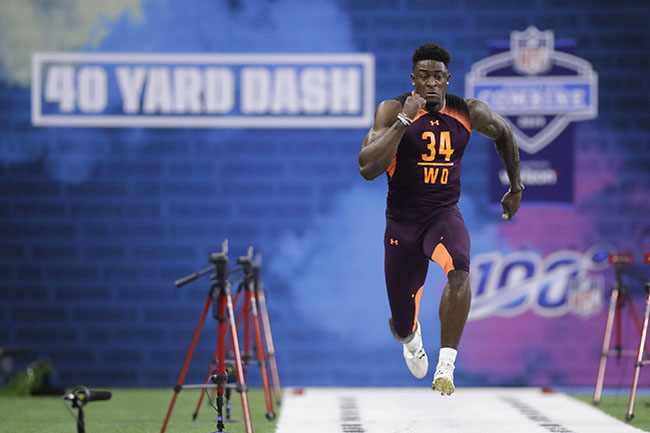 There’s really no argument to be had – Ole Miss performed better on a turf field in Indianapolis battling against air than they did in any SEC game in 2018.

Nine former Rebels held their NFL job interviews over the past weekend in Indianapolis at the NFL Combine, making national headlines in the process.

Talking about Ole Miss at the combine has only one logical starting point, Oxford’s own D.K. Metcalf. He may not have been a household name at this time last week, but Metcalf now has the ear of NFL fans across the country after his super-human combine.

Even Metcalf’s body measurables made headlines before he ran drills. Weighing in at 6-foot-3 and 228-pounds, Metcalf recorded the second largest wingspan in NFL combine history. Arm-to-arm, his wingspan was 82 7/8-inch, arguably that of an Andean Condor. He wasn’t done.

People started taking note of Metcalf’s freak athleticism when he vertical jumped 40.5-inches. Then he ran. After two attempts at the 40-yard-dash, Metcalf topped-out at 4.33-seconds.

I'm honestly starting to think that #OleMiss' DK Metcalf is the next step in human evolution. Someone convince me how this dude is a homo sapien pic.twitter.com/gmxPFaWPgj

Here’s the full list of receivers who have ever ran under 4.35 at 225-pounds or more: D.K. Metcalf. That’s it. To put this in perspective, Julio Jones ran a 4.34 at 6-foot-3 and 220-pounds. It’s truly rarified air Metcalf is breathing. He pushed himself into the top-half of the first round with the performance, maybe even into the top-10.

D.K. Metcalf's flower chart is so weird. Absolutely freaky at 9 categories, among the worst at the combine at lateral agility drills. #OleMiss pic.twitter.com/qMbJqlBQVf

If we’re ranking remarkably impressive workout warriors for the Rebels, Zedrick Woods is not all that far behind Metcalf. Battling questions of athleticism on tape, the defensive back ran the fastest 40-yard dash time at the whole combine with a 4.29.

Woods was touted as a physical safety that’s capable of battling at the line of scrimmage. However, now there’s no more questions of whether Woods has what it takes from an athleticism perspective.

Zedrick Woods running 4.29 is the single most stunning Combine result I have ever seen, at any position, ever.

While no doubt the more productive college receiver, A.J. Brown also had himself a good combine, just not as flashy as his counterparts. Brown ran 4.49-seconds in the 40-yard dash and jumped 36.5-inches. The Brown v. Metcalf debate was reasonable going into Indianapolis, but he was passed by Metcalf after measurables and drills.

At 6-foot-1, Brown is likely a big slot receiver at the next level. He’s the best route runner of the group and has shown the ability to play outside as well.

Brown is still a likely first round pick, and I’m not sure anyone would be all that surprised if he ended up the more productive pro than Metcalf. He simply doesn’t have the same upside.

Ole Miss WR A.J. Brown said one of the only things separating him from D.K. Metcalf is speed. Brown joked earlier that he could run a 5.0-second 40 but still have football speed. pic.twitter.com/6aWHLhfP1g

Knox didn’t run the 40, recovering from a recent sports hernia surgery. However, he looked impressive running routes and caught some tough throws.

Knox’s highlights are his size and athleticism, both abnormally high for the position. The downside is simply – he wasn’t used in college much and has very little to show on tap.

Saturday he certainly helped his stock by showing he can make these sorts of catches. Knox will need to run well at the pro day.

Dawson Knox dig route. Kim Jones also reported he didn't do the 40 because of a hernia injury. Will run it at his pro day pic.twitter.com/VHlWxFA1Ua

The best of the rest

Little is a borderline first-round pick but struggled at the combine. He has all the physical measurables you want for an offensive tackles, but lacked the testing numbers. Little ran a 5.34 40-yard draft, pretty slow for a tackle. Since 2010, only four tackles running a 5.30 or slower were drafted in the first round. None of them made it to a second contract with the team that drafted them. Little may be better off as a guard at the next level.

Jordan Ta’amu was up and down Saturday. He was athletic and made some throws, but struggled hitting the dig route, missing three straight over the middle. In fairness, that’s something that’s hard to get the timing down on with receivers you’re unfamiliar with. the Pro Day will be very important for Ta’amu. He’s going to be fighting for a late-round pick at quarterback.

Ole Miss will hold a pro-day in late March or early April, another chance for these nine plus others not invited to the combine to show off for NFL scouts before the April 25 draft.