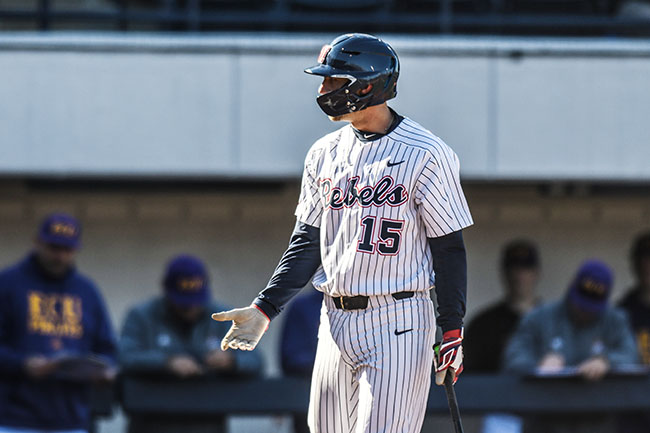 Ole Miss’ Grae Kessinger reacts to striking out in the first inning against East Carolina at Oxford-University Stadium in Oxford, Miss. on Wednesday, March 6, 2019. (Bruce Newman, Oxford Eagle via AP)

In a dramatic change of events to the typical brand of Ole Miss baseball thus far in the season, No. 14 ECU shut out the Rebels on Wednesday afternoon through 8.2 innings. They would win 3-2, carrying a no-hitter into the bottom of the ninth before almost blowing the game.

Despite posting a 2.57 ERA through seven innings of work on the year, Jake Kuchmaner hasn’t even been the best ECU pitcher on the year. That slot is reserved for Gavin Williams who pitched Tuesday at Mississippi State. However,on Wednesday he was electric, ripping through an Ole Miss lineup that has averaged 8.7 runs per game.

Kuchmaner held a perfect game into the fifth inning before hitting Ryan Olenek. The no-hitter went into the ninth, where he struck out the first two Rebel batters. He then walked a third and Thomas Dillard did as Thomas Dillard does – got a hit. The game wasn’t over.

“You see it like the fourth or fifth inning. You kind of see it and then you’ve just got to remind yourself ‘Keep making pitches, keep making pitches. You’re not done yet, you’re not done yet,'” Kuchmaner said. “You take that in, you kind of forget about it once you’re up there and then in between innings you kind of see it again. It’s just kind of the same thing over and over again. You just have to remind yourself to keep going.”

Ole Miss made it close in the bottom of the ninth. Truly, dramatically, biting-your-nails close. Tyler Keenan hit a two-RBI single over the head of the ECU third-baseman to get Ole Miss within one. The Pirates should have closed the game when Ryan Olenek then hit a ball right to the shortstop, but he bobbled the ball for an error. Nearly pulling off what would’ve been a remarkably memorable comeback, Cooper Johnson popped out to right field to end the game.

Kuchmaner’s final line: 8.2 innings, nine strikeouts, one hit, one hit batter, one walk and no runs.

“Everything he was throwing was just on the black on either side of the plate. He wasn’t necessarily the hardest thrower, but he was just putting it where he wanted,” Dillard said. “You have to give him props. He had his stuff today and we just weren’t doing our best job of fighting it.”

It was truly an impressive outing for Kuchmanner, almost no-hitting one of the best offensive teams in the nation. It’s unknown when the last time an Ole Miss team had a no-hitter thrown against them as the team only tracks no-hitters thrown by the Rebels. Wednesday afternoon they escaped one.

“It was just one of those nights. You just have to credit them,” said Ole Miss head coach Mike Bianco.

True freshman Doug Nikhazy was fantastic on the mound against a really good ECU team early but had one tough inning. He gave up a single on the opening pitch of the game, before retiring the next nine batters, striking out five. Then the fourth came along.

Facing the top of the Pirate order to start the fourth, Nikhazy gave up a double and a single to start the inning. The third batter, Spencer Brickhouse, took Nikhazy to deep right center. His second home run on the year gave ECU a 3-0 lead.

Nickhazy wouldn’t allow another hit all night, being replaced in the top of the sixth after walking the leadoff batter. His final line read five innings pitched, four hits, three earned runs and seven strikeouts. Austin Miller pitched three hitless innings of his own in relief, bringing his ERA down to 0.68 on the year. Connor Green pitched a scoreless ninth inning.

“I thought Doug was terrific,” Bianco said. “(Bryant) Packard and (Spencer) Brickhouse, they’re middle of the lineup type of guys that would bat on any team in the SEC… it’s tough to run through them. They just put three really good at-bats together there (in the sixth).”

Next up for the Rebels, a three game weekend series with 9-4 UAB before traveling next week for a two-game midweek series against No. 8 Louisville.