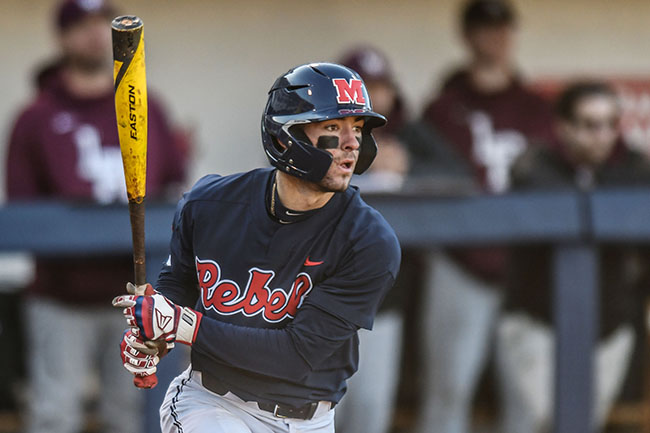 The visiting team fought back late with a ninth-inning rally, but the No. 9 Ole Miss Rebels were able to secure a midweek victory over Arkansas-Little Rock with an 11-8 win at home. Ole Miss (9-2) outhit the Trojans 13 to 10, and were led at the plate by sophomore Tyler Keenan, who went 3-for-5 on the day with four RBI, surpassing Thomas Dillard for most on the team.

After six runs spread out over the first two innings and a four-spot in the seventh inning, it was shaping up to be another easy midweek victory for the Rebels, but Arkansas-Little Rock came storming back with four runs in the top of the ninth, extending what was already the longest game of the season for Ole Miss.

The Rebels, however, had given themselves a large enough cushion that even four runs in the final frame would not be enough to upend the home team. Four different Rebels – Keenan, Grae Kessinger, Anthony Servideo, and Ryan Olenek – had themselves multi-hit days, who were able to help give Ole Miss their fifth game of the season with double-digit run totals.

It took the Trojans eight pitchers to try and calm the Rebel bats, and to no avail, however, as Ole Miss was still able to hang 11 runs on Little Rock.

Olenek and Thomas Dillard entered the game both boasting a hit in every contest of the season and extended on their streaks with solid performances at the plate today. Olenek extended his hitting streak to 11 games with a 2-for-4 day at the plate, while Dillard upped his to 13 (dating back to last season).

Sophomore Max Cioffi earned his first career win on the mound and a new career high in strikeouts as the first pitcher out of the bullpen and was the bright spot on the day for the Rebel pitching staff. Cioffi was able to go 3.2 innings of relief after starter Jordan Fowler ran into some trouble in the fifth and would finish out the eighth inning with a new Rebel-best in strikeouts with seven.

Fowler got off to a hot start, holding the Trojans hitless and scoreless over the first four innings. He had racked up three strikeouts before a few hit batters in the fifth inning caused some trouble for the Rebel starter. Cioffi would relieve Fowler and stop the bleeding after the fourth run of the inning came around, but Fowler finished his day with all four earned runs credited to his name.

Servideo got out to a fiery start on offense today, recording two hits before the second inning even came to a close. He led it off in the first inning with a double down the third base line after a Kessinger single to start the game. Keenan would bring around Kessinger for his first of four RBI on the day, with two more to come an inning later.

Servideo picked up an RBI in the second on a single to score Jacob Adams, before Keenan brought two more around on a two-run single. Cole Zabowski wrapped up the inning with another RBI single, and the Rebels were through two innings with six runs to their name.

Fowler’s rocky inning would diminish the Rebel lead to just three, but a four-spot in the seventh would recoup the losses brought about by the Trojans’ dominant fifth inning. The Trojans used three pitchers in the bottom of the seventh, but the Rebels were able to find success against all of them.

Adams, Kessinger, and Keenan all picked up RBI in the frame, while Kessinger matched his career best of three runs after scoring on a double steal from third.
Going into the final inning with a seven-run lead, Coach Bianco elected for Ray Falk to make his career debut in the ninth inning. Falk’s debut was spoiled, however, with a pair of walks and a single to load the bases and draw Kaleb Hill out of the bullpen.

Hill didn’t fare much better, allowing two hits, including a two-run triple just past the outstretched glove of Carl Gindl in right, before, just like that, the Trojans had cut the Rebel lead to three. Hill was able to save the game for Ole Miss, however, with a game-ending groundout to first, securing the 11-8 victory for the Rebels.

Ole Miss will return to Swayze Field tomorrow night in their first ranked matchup of the year, as they welcome No. 14 ECU for a 3 p.m. first pitch in Oxford Wednesday afternoon.