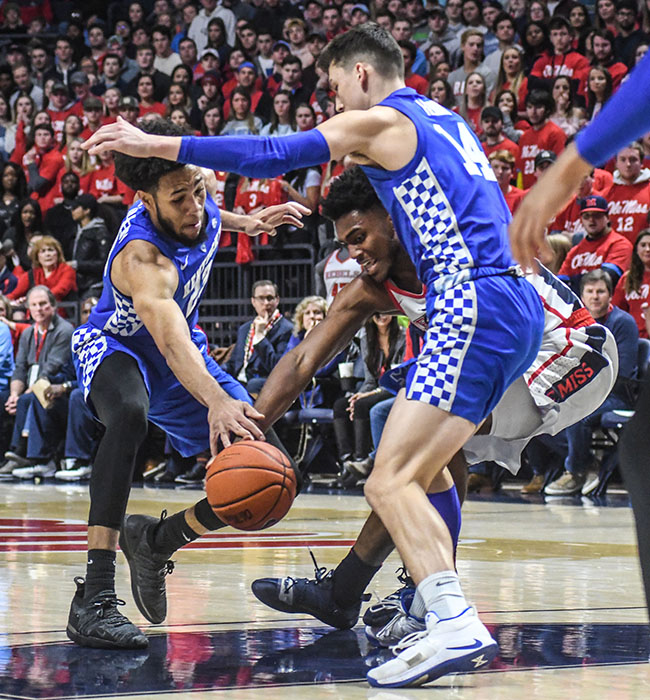 OXFORD – The last few weeks have been a grind for Kermit Davis Rebel squad. After losing to Kentucky 80-76 on Tuesday to fall to 9-8 in conference play, the team has now played four consecutive games that came down to the final seconds of play.

“What I try to tell the team is that we really are about three possessions away from winning eight out of nine. We still have the same warts and same good things; we just have to keep plugging away,” Kermit Davis said after Tuesday’s loss. “We have to stay positive with these guys on the floor, because they’re trying their tails off.”

Down the stretch against Kentucky, the team simply looked gassed. Kentucky’s youth, physicality and toughness seemed to get to the Rebels. Kermit Davis didn’t exactly confirm that they were worn down in the final minutes, but also didn’t go out of his way to deny it when questioned.

Terence Davis said he personally wasn’t any more exhausted than any other game, but he’s used to play those kinds of minutes in big games. In the three-game losing streak where each game ended near the buzzer, Davis is averaging 36 minutes and played all but one against Kentucky. He gave a different reason for the team failing to execute late:

“I just feel like we stopped running our offense. I took a few quick shots. There was one time it was a one-on-three – me and three Kentucky players. I just stopped and took a three-ball,” Terence Davis said. “We just have to make smarter plays down the stretch. Those are winning plays, pulling the ball back out.”

Issues late game isn’t something the team has really shied away from talking about. Just like discussing their NCAA tournament chances, everyone has been pretty honest about how much of a struggle it’s been. That said, Kermit Davis said the staff has been impressed with how the team has handled losing games the way they have.

When asked if he likes how the players have dealt with the late-game adversity, Kermit Davis had this to say:

“I have. The way our team responded tonight and played (was good). We’ve been right at the end. We just have to make some plays and get some stops at the end of these games.”

Like his coach before him, Terence Davis agreed they the team is two or three late-game shots or defensive possessions away from winning their last two games.

After dropping three in a row, the team has gone from a relative lock for the NCAA Tournament to shaky ground. With a weak bubble this year, the Rebels are still likely in okay shape. However, picking up conference win number ten on the road at Missouri Saturday would go a long way.