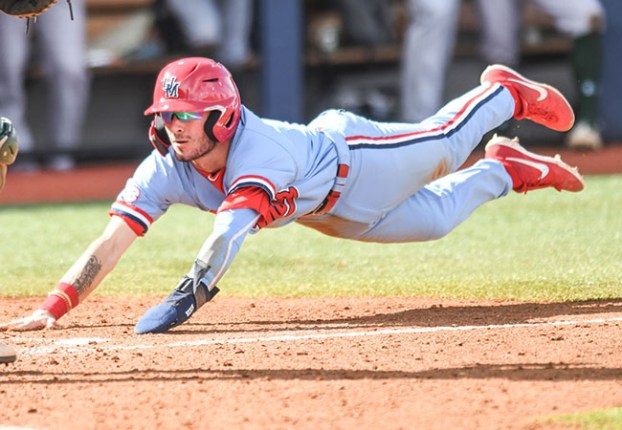 Ole Miss' Anthony Servideo scores against Alabama-Birmingham at Oxford-University Stadium in Oxford, Miss. on Sunday, March 10, 2019. Servideo was drafted by the Baltimore Orioles in the third round of the 2020 MLB Draft this month. (Bruce Newman, Oxford Eagle via AP)

OXFORD – In a stark change of pace from the first two games of the series, Ole Miss was held scoreless through five innings in game three against UAB Sunday. However, like the first two, Ole Miss came through late to get the win, completing the weekend sweep with a 2-1 victory.

“I know it looks like a game won by the pitchers, and it certainly was,” said head coach Mike Bianco. “When you look at it indirectly it was probably won by the offense. We had two mid-week games where (all the guys that threw today) threw. Because we had such a big lead on Friday and Saturday we didn’t have to use those guys. We had a really rested bullpen today.”

UAB starting pitcher Tanner Rusk came into the day with a 2.03 ERA. He was fantastic again early in this game. Throwing just five innings, Rusk blanked the Rebels, allowing just four hits. It wasn’t until Rusk came out of the game when Ole Miss first got on the board. Tying the game at 1-1 in the bottom of the 6th, Thomas Dillard hit his 7th home run on the year, a solo shot to right center.

Ole Miss took the lead just one inning later, as Anthony Servideo went first to home on a Tyler Keenan single that the right fielder struggled to handle. The third run would be the final one scored, as Ole Miss won 2-1.

The Rebels averaged 1.7 runs per inning over the first two games of the series. On Sunday, they needed just two total.

UAB put a scare into the Rebels in the eighth when a runner went from first to third on a steal after the throw to second came up short and rolled into the outfield with one out. Parker Caracci would get out of the inning after a Blazer batter was called for catcher interference while strikeout out during a hit and run situation.

Austin Miller had been arguably the most consistent Rebel reliever through the early season. Miller took over for Hoglund in the top of the fourth. Miller threw 2.1 scoreless innings before loading the bases in the sixth inning, leading to him being pulled for Connor Green.

Green got Ole Miss out of the sixth without giving up any of the runs put on base by Miller. Both Green and Miller both leave the game boasting ERA’s under 1.0 in 10 or more innings of work on the season. Doug Nikhazy and Parker Carraci combined for two scoreless innings to close the game.

“Friday night and Saturday night we had a bunch of guys that didn’t come out of the bullpen because we didn’t really need them,” Servideo said. “Today we have four of our main guys come out that UAB hadn’t seen before.”

After being tagged as a Second Team All-American in 2018, Caracci has struggled tremendously to start the 2019 season. Entering Sunday, he had made three appearances, going just 2.1 total innings with a 19.29 ERA. Sunday against UAB, Caracci’s velocity was up, topping out at 95 miles-per-hour, and he seemed much more in control. He went 1.2 innings to end the series against UAB, giving up just one hit and allowing no runs.

“I’m glad I got to get back out there and feel like myself again, get my confidence back,” Caracci said. “(I was) anxious. When we’re winning by that much, in the past couple of days, you’re just sitting there and waiting, knowing you’ll get a chance.”

Sunday’s game marked the final non-conference home game for Ole Miss before the start of SEC play. The Rebels travel to No. 8 Louisville on Tuesday for a tough, two-game, midweek series with the Cardinals before opening SEC play at home to Alabama on Friday.

OXFORD – Saturday starts have been a sludge for Ole Miss on the mound. They’ve allowed 8.7 runs per game... read more