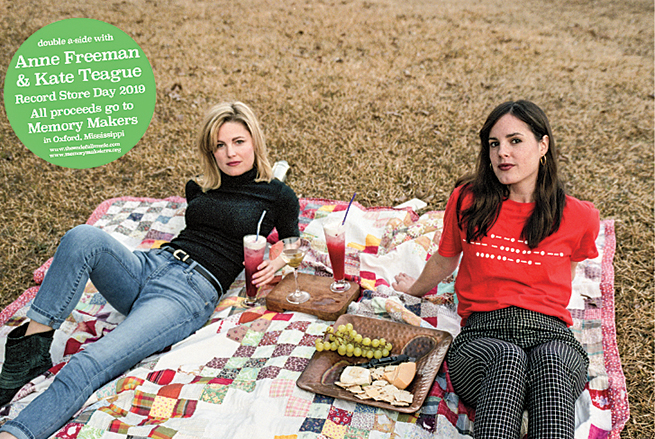 Next month brings the annual tradition of Record Store Day, where independent record stores across the country sell special and limited records by hundreds of artists to commemorate the day. Oxford’s The End of All Music puts out their own releases from local artists each year and 2019’s release will do some good for a local organization.

To celebrate this year The End of All Music, along with Oxford musicians Kate Teague and Anne Freeman, will release a limited double a-side single. The 7-inch record will be limited to 300 copies and pressed to colored vinyl will only be available the shop on Record Store Day, which takes place this year on April 13.

“We haven’t done a proper vinyl release of a local artist since our second year (of Record Store Day),” David Swider said. “I’ve wanted to do one and I’ve just been waiting for the right thing to come along. Just so happened Anne and Kate both have been working on new albums. They’re both really strong female artists and obviously both live in Oxford, they’re friends. It just kind of made sense to ask them.”

Swider is the owner of The End of All Music.

The single will feature a song from Freeman titled ‘Generation’s Fast’ on one side and a song by Teague called ‘In Our Element’ on the other side. Both songs are from upcoming albums both Freeman and Teague are putting out at a later date.

Teague is also the director of the Thacker Mountain Radio Hour.

All proceeds of the record will go to Memory Makers, which is a respite day program for caregivers and persons with dementia. Memory Makers is a non-profit community resource that is located in Oxford at 311 Heritage Drive. For more information on what the group does call 662-234-3332 or visit their website memorymakers.org.

This is the second Record Store Day release the store has put out that will benefit a charity. The release End of All Music put out for Record Store Day was a cassette of local various artists and all proceeds went to MusiCares. The charity has provided more than $60 million in health, financial and rehabilitation resources to music people in times of need.

Freeman and her band, The Garbage Sons, will be playing the official Record Store Day after party at Proud Larry’s the night of April 13.