What we learned in the Rebel sweep of UAB 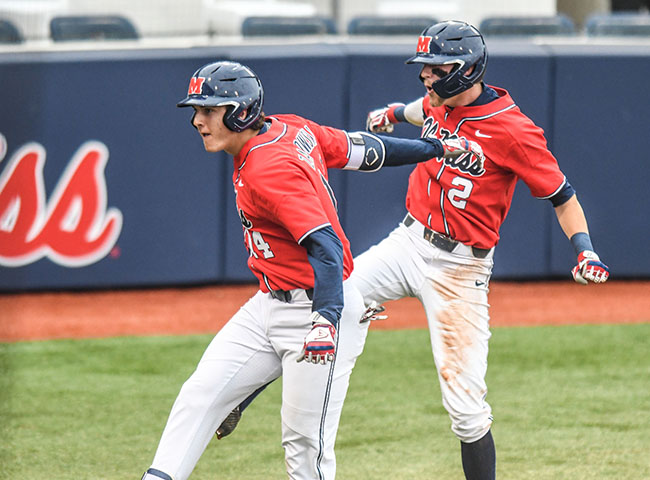 OXFORD – Ole Miss got to 12-3 this past weekend with a sweep over UAB. Winning the three games by an aggregate score of 30-14, the Rebels looked dominant at times. Now, they have just two games remaining before the start of SEC play.

However, these two games aren’t just a tune-up for conference play, they’re the hardest games to date for Ole Miss. The Rebels travel to Kentucky on Tuesday for a two-game series with No. 8 Louisville before hosting Alabama next weekend to start SEC play.

With 15 games under their belts, things are starting to sort themselves out with this Rebel team. Here’s what we learned from this weekend’s sweep, heading into the biggest week of the season.

1. It’s possible to teach yourself a new pitch in just a week

Zack Phillips had struggled through his first three starts of the season. Going into the UAB series, his ERA was 7.50 and he had yet to go longer than 5.0 innings in a start. On Saturday against UAB, he allowed just one run in 7.0 innings, thanks in part to a new addition to his arsenal.

Phillips, over the course of just a week, taught himself a slider. He used the new pitch a good bit Saturday and did so very affectively. He said he threw the pitch 18 times for 16 strikes. Head coach Mike Bianco said he saw 8 of 10 on the chart but admitted he had only checked after the sixth inning.

“I started working on a new pitch on Monday, a slider. Today was the first time I threw it in a game,” Phillips said. “My curveball and my fastball are on different planes. I wanted a pitch that was kind of on the same plane as my fastball but on the end it broke.”

Phillips said he’s seen his mental toughness and confidence grow over the course of this opening month. It’s possible the effectiveness of the slider could be a one-game aberration, however it’s certainly a welcomed change to a Saturday starting role that had been a struggle to start the year for Ole Miss.

2. Errors an issue in early innings

Ole Miss committed six errors on the year coming into the UAB series. In three games against the Blazers, they committed nine. Interestingly, eight of the nine errors happened in the first two innings of play each game.

“I’m disappointed early on. I think a lot had to do with a pressure of their speed. I think singlehandedly, of the six errors, three were from balls (Jess Davis) hit,” Bianco said after Saturday’s win. “We’ve been so good defensively (before tonight)… we’ve challenged them a little bit after the game, but they’ve got to be cleaner.”

UAB certainly has a few guys that can run. For example, the Davis kid that Bianco referenced has successfully stolen 22 of 25 attempted bases on the year. No Rebel has attempted more than six steals. It’s certainly a problem that needs addressed but overreacting to a one-series sample seems harsh.

3. Austin Miller and Connor Green are the go-to relievers

Neither Miller nor Green saw action on the weekend until later in the game Sunday. However, that was more because neither were needed until then. It’s clear from usage that those are the two guys Bianco trusts most in close-game situations.

On Sunday, the two combined for 3 innings of work, allowing no hits and no earned runs. At ten innings or more a piece, Miller has an ERA of 0.50 and Green is yet to allow a run, 0.00. These two have been electric in their role so far in non-conference play, and seem to have solidified their place heading into SEC play.

Ole Miss scored 15 runs in game one and 13 in game two against UAB, an average of 1.7 runs scored per inning. In game three, they scored just two total runs. It’s a stark change-up and ultimately a good sign.

By building such early leads in the first two games, Ole Miss was able to save Miller and Green until the moments they needed them the most. It’s a way the offense helps out the pitching, even when the offense can’t get itself going in one of the games.

“Friday night and Saturday night we had a bunch of guys that didn’t come out of the bullpen because we didn’t really need them,” said second baseman Anthony Servideo. “Today we have four of our main guys come out that UAB hadn’t seen before.”