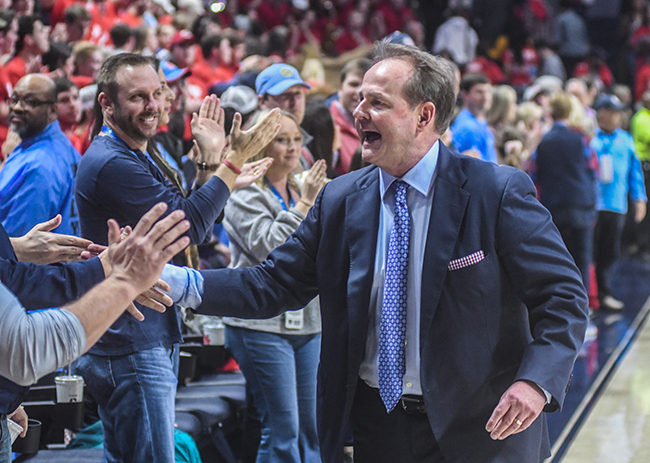 Capping a substantial, program-defining season, Ole Miss head coach Kermit Davis has been named SEC Coach of the Year in just his first season in Oxford.

The Associated Press released its yearly Southeastern Conference college basketball awards on Tuesday morning, ahead of the conference tournament in Nashville beginning Wednesday. In addition to Kermit Davis being named Coach of the Year, Ole Miss junior guard Breein Tyree was named to the All-SEC second team.

Ole Miss went 20-11 in their first regular season under Davis, going 10-8 in the SEC. It’s a considerable improvement from the 2017-18 season in which the team went 12-20 and 5-13 in conference, with much of the same core of players as were contributing to last year’s team.

The last time the Rebels made the NCAA Tournament was in the 2014-15 season, when the team went 21-13, 11-7 in the SEC. That team was an 11 seed and had to travel to Dayton to play in the first-four games. This year’s Rebels are essentially locks to make the NCAA Tournament for the first time since then.

All year, Davis has been quick to credit former head coach Andy Kennedy and the players when talking about the rebuilding year that hasn’t been a rebuild whatsoever. Kennedy left him with a good number of talented players, particularly the three starting guards in Terence Davis, Breein Tyree and Devontae Shuler.

Players deserve credit as well for sticking through a coaching transition in which they could have transferred elsewhere and potentially been granted a waiver to play immediately. Senior Terence Davis even dipped his toes in the NBA waters before deciding to return for his final season.

Winning Coach of the Year activates one of many incentives in the coach’s contract with the University. This one is for $50,000 and he will also get another $50,000 if the Rebels make the NCAA Tournament.