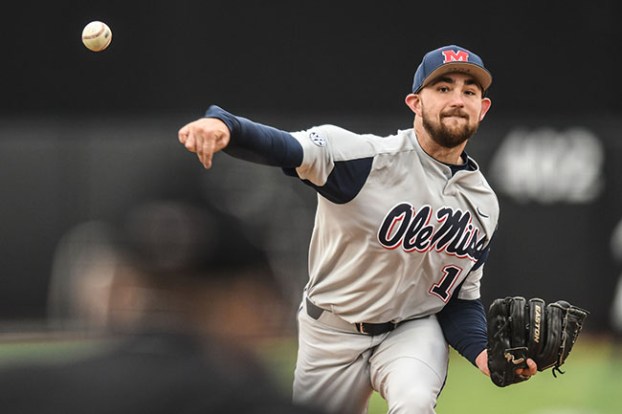 Rebels Drop Heartbreaker to No. 7 Louisville in Extra Innings

LOUISVILLE, Ky. – Ole Miss battled back from an early deficit at No. 7 Louisville, but a walk-off base hit in the bottom of the 10th gave the Cardinals a 4-3 win in the top-10 matchup.

The Rebels (12-4) fell behind 3-0 early but tied the game with a three-run seventh inning. It wasn’t quite enough though, as the Cardinals (12-4) walked it off in the 10th on an RBI single by Zach Britton.

Ole Miss received strong performances on the mound by Doug Nikhazy and Connor Green. Nikhazy went a career-high 6.0 innings, allowing three runs on five hits with five strikeouts. Green turned in 3.1 innings of work, striking out five and yielding just two hits and one run. Prior to the 10th, Green allowed just one runner on base, who reached on an error, through three innings.

Louisville opened up the scoring with a leadoff single in the first, followed by a two-run home run off the bat of Tyler Fitzgerald to give the home team an early 2-0 lead. Nikhazy bounced back though, striking out the next two batters and retiring the third on a flyout to end the inning.

The Rebels nearly did damage in response in the following inning when freshman Kevin Graham smacked his first career triple high off the wall in right field. However, Ole Miss couldn’t bring him home after the two-out extra-base hit.

Nikhazy continued post-homer hot streak, retiring three straight Cardinals for an easy second frame. He totaled three one-two-three innings on the day. He surrendered a leadoff double and a walk in the third but escaped it unscathed with a strikeout. The freshman out of Windermere, Florida, then retired Louisville in order in the fourth.

Jacob Adams looked to get the Rebels going in the fifth with a one-out single to right, but the Ole Miss offense make anything of it. Louisville took the opportunity to tack on another run after a leadoff single by Justin Lavey. Nikhazy rebounded with a strikeout and a groundout, but Fitzgerald laid down a perfect bunt single to bring Lavey home and make it a 3-0 lead. After issuing a walk, Nikhazy fanned Danny Oriente to end the Cardinal threat.

Following another one-two-three inning for Nikhazy in the sixth, the Rebel bats finally broke through in the seventh. Ryan Olenek sparked the rally with a double deep into the left field corner, followed by a single to center by Cole Zabowski. Graham then delivered once again, dropping a double into the right field corner to plate Olenek. Zabowski came home one pitch later on a wild pitch, and Adams tied it up shortly thereafter, sending Graham home with an infield single.

Connor Green then took the reins for the Rebels and was lights-out for three straight innings as he has been all year. Green sat the Cardinals in order in the seventh, striking out a pair. He fanned two more Cardinals in the eighth, allowing one runner to reach base on an error. The senior out of Collierville, Tennessee, was perfect again in the ninth with one strikeout and a pair of flyouts to send the game to extra innings.

It looked as though Green would keep it going in the 10th. After a quick groundout to open the inning,  a one-out triple off the wall in left by Jake Snider put the Rebels against the ropes. Ole Miss intentionally walked the next two batters to put the force out in effect, but Britton dropped one into shallow right field end it.

Ole Miss and Louisville will play it back again Wednesday at 11 a.m. CT.