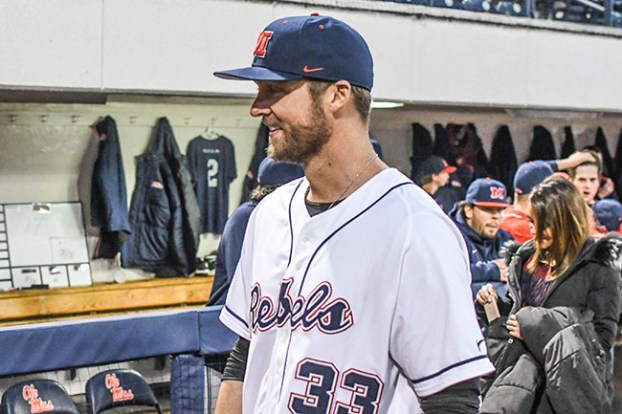 Brett Young has become one of country music’s brightest new stars, but before that, he was a member of the Ole Miss baseball team. Next week, the former Rebel is returning to Oxford to shine a spotlight on his alma mater.

The home of Ole Miss baseball, Oxford-University Stadium, and other areas on Ole Miss’ campus will serve as backdrops for Young’s next music video, which will shoot on March 20 and 21. The video will be for Young’s current single ‘Catch’ from his second studio album called ‘Ticket to L.A.,’ released in December.

“It will be a very positive, happy kind of nostalgic tone to the video and just an homage to Ole Miss,” Paige Bennett said.

Bennett is a producer on the video shoot and is handling the casting call announced earlier this week.

The video will cover Young’s time at Ole Miss and hit several key life moments, including when he met Taylor Mills. Young and Mills married in November after proposing to her last February. The focal point of the video will take place at O-U Stadium, and a mock baseball game will take place..  A small scene will be filmed at Oxford Burger Co. located on the Square.

“The video will be Brett on the baseball field and kind of reminiscing about all the wonderful memories he had at Ole Miss,” Bennett said. “We’ll have a younger version of Brett cast, portraying those memories of baseball games and meeting Taylor at college at that time. There are various moments on campus.”

College students are needed for the shoot on March 20 for what Bennett called ‘montage moments’ of Young and Mill’s time at Ole Miss. The shoot on March 21 will be at the baseball stadium and there are no criteria for portraying a fan.

Young, a native of Anaheim, California, came to Ole Miss in 1999 on a baseball scholarship after turning down a pre-draft selection by both the Tampa Bay Devil Rays and Minnesota Twins. He spent one season with the Rebels in 2000, where he earned a varsity letter and posted two wins and two saves. Young then transferred back out west to Irvine College where he lettered for one season before finally ending up at Fresno State. Young’s baseball career was cut short due to an elbow injury while at Fresno State in 2003.

Four years later, Young embarked on his country music career, releasing a self-titled four-song EP on his own. From 2011-13 he has released four additional albums.. In 2017, Young released his self-titled debut studio album, which hit No. 2 on Billboard’s Top Country Albums chart.

Young has been nominated for eight awards ranging from the Academy of County Music to Teen Choice Awards, Billboard Music Awards, Country Music Association Awards and CMT Music Awards. He won New Male Vocalist of the Year at the ACM awards last year.

Those interested in participating in the shoot can email brettyoungcasting@gmail.com. Bennett said they will respond to people with what days they are needed and times to be available for the video shoot.

The alcohol and drug education programs at the University of Mississippi received a boost last week. The Triplett Foundation awarded... read more