“Anybody can win it:” Ole Miss prepares for loaded SEC Basketball Tournament 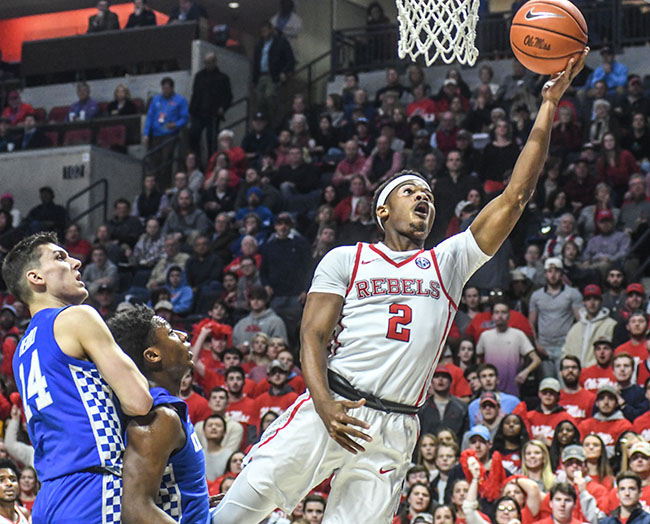 Kermit Davis’ Rebels felt confident returning to Oxford Saturday evening. Having just knocked off Missouri on the road, picking up their fifth quadrant one win of the year, Ole Miss’ NCAA Tournament bid was back on firm ground. With as many as four and as few as one game left to make their case for the NCAA selection committee, Ole Miss tips off their first game of the SEC Tournament on Thursday evening in Nashville, in a tournament that’s as loaded as it’s ever been.

“The league is so, so good that anybody can win it,” said Ole Miss assistant coach Ronnie Hamilton, filling in for Kermit Davis on the SEC Teleconference. “We had a great win Saturday. We had to fight through adversity, down 11 in the first half and 10 in the second. We found a way to make plays down the stretch. We’ve lost a lot of close games recently. This game we were able to win on the road, we think that will propel us to play well in Nashville. We will have to play extremely well to have a chance to win on Thursday, but the guys are excited about the opportunity in front of them.”

The tournament kicked off Wednesday with two games between the four worst teams in the conference. Ole Miss won itself a first-round bye and will play Alabama Thursday night at 6 p.m. Central time.

Top-to-bottom, this is as good as the Southeastern Conference has ever been. Three teams – Tennessee, LSU and Kentucky – will arrive in Nashville sporting top-10 national rankings. Four more, including Ole Miss, are projected to make the NCAA Tournament according to ESPN and Alabama is a team right on the cusp of the bracket. The SEC record for tournament teams is eight, and there’s a solid chance this year ties that mark.

Alabama isn’t exactly the best matchup for Ole Miss. Their length, athleticism and physicality really bothered the Rebels in their only meeting of the year. That game, in Tuscaloosa, was likely the worst game of the year for Ole Miss. They fell behind early and were never able to recover, getting blown out on the road to start a four-game losing streak.

“We had a hard time from a physical standpoint in that particular game. They were one of the first teams to do a lot of switching one through five against us. That negated some of our mismatches and things we do offensively,” Hamilton said. “We’ll be more prepared for that having seen it throughout the league. They really exposed us on the offensive glass. In games where we rebound the ball well we’ve had a chance to win. Other games we haven’t. They’re as talented as any team in this league.”

After the win over Missouri, Ole Miss ranks 35 in the NET rankings at 20-11, 10-8 in the SEC. The NCAA Selection Committee has never left out an SEC team with 20 total wins and 10 conference wins. Ole Miss finished the year with five quadrant one wins, defined by quality of opponent and location of the game. A home game against a top-30 NET team, a neutral game against a top-50 NET team or a road game against top-75 NET teams count as quadrant 1 wins. For example, No. 8 Tennessee, who is in contention for a number-one overall seed, has just seven quadrant one wins.

“When you think of the teams we beat, our profile matches up against the bubble teams. We feel good about it. This league is as good as any in the country. You go through this league and win 10 games, tied for sixth, win 20 in the regular season, beat teams like Baylor, I think the resume should put us in, but you don’t want to go in (SEC tournament) assuming that you are,” Hamilton said.

While the NCAA Tournament is clearly the ultimate goal, it’s not the present goal. Thursday, all eyes are focused on Alabama. If the team were to get past the Crimson Tide, they’d play Kentucky on Friday night, a team they lost to 80-76 just over one week ago. In total, winning the entire SEC tournament would lock up the Rebels an automatic bid to the big dance, their ultimate goal completed.