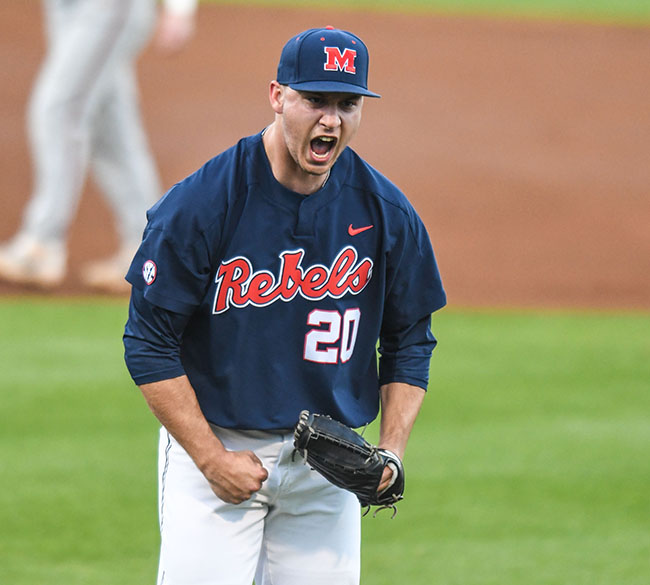 Mississippi pitcher Will Ethridge celebrates after getting a strikeout to end the first inning against Alabama in Oxford, Miss. on Friday, March 15, 2019. (Bruce Newman, Oxford Eagle via AP)

The offense was in short supply and in need of Will Ethridge’s best outing of the season. No. 9 Ole Miss got it in their 1-0 win over Alabama to open conference play on Friday at Oxford-University Stadium.

Coming off the midweek sweep at No. 7 Louisville, the Rebels (13-5, 1-0 Southeastern Conference) got solid performances on the mound from Ethridge, Austin Miller and Parker Caracci.

With the game turning into a pitcher’s duel, Ethridge went 6-plus innings in his first career Friday start in conference play. The junior gave up three hits and issued four walks in his longest outing of the season.

“My arm felt great. I just lost command and was trying to be too perfect out there in the first two innings and walked some guys and that’s just not me,” Ethridge said. “It felt great being out there. I know that our guys have my back and they’re going to make plays. It might just be a one-run ballgame and it’s my job to go out there and put up zeros.”

The difference in the game was a solo home run by Cole Zabowski in the bottom of the second inning. The junior went 2-for-3 and was the only Rebel to have a multi-hit game.

The rest of the offense struggled against Alabama starter Sam Finnerty. The senior worked six innings and gave up four hits while striking out four Rebel batters.

It was a sluggish night at the plate for the Rebels with the top half of the lineup going 2-for-10. Thomas Dillard and Ryan Olenek went hitless on the night, going a combined 0-for-7.

“I don’t know besides the almost no-hit against East Carolina if we were dominated as much by a pitcher this year,” Ole Miss head coach Mike Bianco said. “(Finnerty) was just able to locate. …We just looked out of sync.”

Miller and Caracci did their jobs, keeping Alabama (16-3, 0-1) off the scoreboard in relief. After issuing a leadoff walk to start the seventh inning, Miller came in and recorded four consecutive outs before turning the ball over to Caracci in the eighth inning for the final five outs.

Caracci picked up his third save of the season while Ethridge improved to 4-0 on the year.

“We knew (Miller) would be a good match with his breaking ball, even with the left-handed hitters,” Bianco said. “It gave a chance for some some other guys to take a little break and we needed that.”

The Rebels will look for the series win on Saturday. First pitch is scheduled for 1:30 p.m.