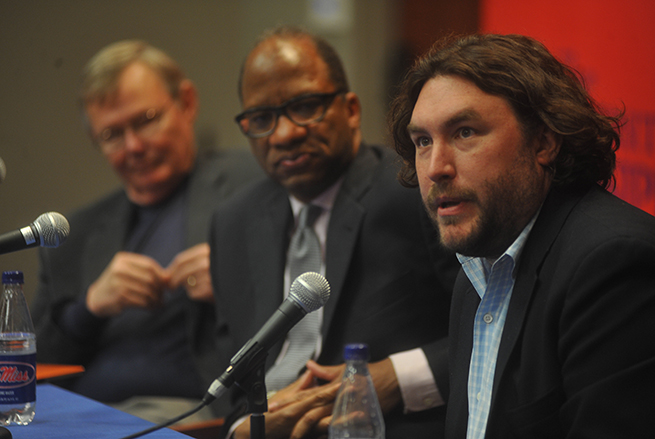 Rick Cleveland of the Clarion-Ledger (from l.), Wil Haygood of the Washington Post, and Wright Thompson of espn.com, during a session on sports writing at the 18th annual Oxford Conference for the Book at the Overby Center at Ole Miss in Oxford, Miss. on Friday, March 25, 2011.

The Overby Center for Southern Journalism and Politics is hosting the first-ever Willie Morris Writer’s Series beginning next month, and a prominent Oxford journalist is involved in the first event.

ESPN senior writer Wright Thompson will speak at the Overby Center on April 5 at 11 a.m. to discuss his latest book ‘The Cost of Dreams: Sports Stories and other Serious Business” among other topics. The book, which will be released earlier that week on April 2, is a collection of portraits ranging from prominent sports figures, coaches and even Thompson’s father.

One of the essays in Thompson’s latest book centers around Ole Miss’ lone undefeated football season in 1962, as well as the riots that took place over racial integration that captured the nation’s attention.

Thompson, a Mississippi native, has some of ESPN Magazine’s most popular articles and has had his worked published in “The Best American Sports Writing” book series several times throughout his career.

The Willie Morris Writer’s Series honors one of Mississippi’s most prominent writers in the state’s history. Morris was a Jackson native who was known for his writings on the South and the Mississippi Delta. Morris gained national notoriety when his 1995 book ‘My Dog Skip’ was adapted into a film in 2000, one year after Morris’ death.