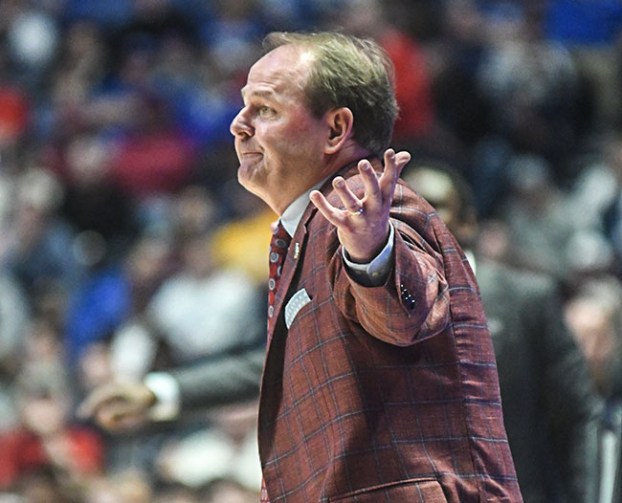 NASHVILLE – Thursday’s exit was ugly. Blowing a 14-point halftime lead to get bounced by Alabama in their first SEC Tournament game, Ole Miss not only lost a game, they lost valuable opportunities for resume boosting games.

Selection Sunday is just days away. Instead of continuing to play SEC Tournament games, the Rebels will be on their couch watching. Waiting. It’s going to be a long few days until Sunday’s NCAA Tournament bracket is revealed for Ole Miss, but head coach Kermit Davis’ message is clear: they’re in.

The thing is, he’s probably right. Ole Miss has the resume to be in the NCAA Tournament. They likely even have the resume to avoid playing in a first-four, play-in game in Dayton.

Facts are facts. Ole Miss had a 20-11 regular season, going 10-8 in SEC play. The NCAA Tournament selection committee has never left a 20-win, 10 conference win, SEC school out of the tournament. Never.

“I believe we’re an NCAA team,” said freshman forward Blake Hinson on Thursday. “Tonight we didn’t finish a game, but as a whole we are an NCAA team and we should be able to compete in the tournament this year.”

It’s not just the total numerical count of wins that has the Rebels likening their odds, it’s the quality of opponents they’ve done it against.

Looking down their schedule, Ole Miss has lost just two games (at South Carolina and at Arkansas) to teams that are currently not projected as NCAA tournament teams. They’ve also now lost two to Alabama, a team that is firmly on the bubble and could go either way.

At the time of writing, Ole Miss is ranked No. 36 in the NET. It’s a year with a week bubble, and Ole Miss not only has the resume on paper, but they also simply pass that eye test that the committee values. Just in these last two weeks, this team has lost two very close games to No. 7 Tennessee (73-71) and No. 6 Kentucky (80-76).

Going into Thursday, both ESPN and CBS bracketology projected Ole Miss as an eight seed in the NCAA Tournament. They’ll likely slip a hair after being bounced in the first round of the SEC tournament, but it’s unlikely one loss to a bubble Alabama team will cause them to slip that far. The goal is to stay off the 11-seed line, meaning a potential trip to play-in games in Dayton and the potential of having to play three games in five days.

“I feel like we’re definitely an NCAA team. Us going through what we went through,” said sophomore guard Devontae Shuler. “I feel like that’s going to make us stronger. Hopefully we can build off that.”

Losing to Alabama on Thursday was tough. No one on this team shied away from showing emotion about that. The team emphasized the importance of getting back to practice after this one, using the momentum from this heartbreak to fuel their potential postseason games. But now they just have to sit back and wait. The selection show will take place on Sunday at 5 p.m. Ole Miss fans can watch with unblinking eyes, but Kermit Davis isn’t stressed at all.

Friday Bases Loaded: What to watch for as Ole Miss opens SEC play

The non-conference season is over – it’s time for the big boys to come out to play. Ole Miss will... read more