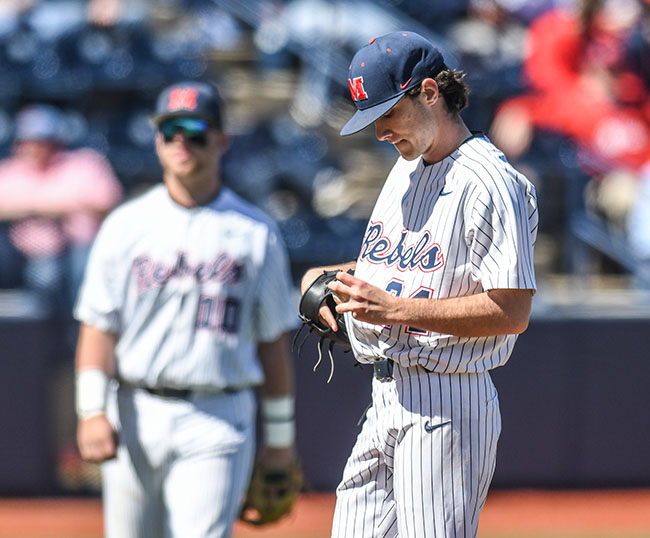 Ole Miss pitcher Zack Phillips looks at the baseball as he waits to be removed from the game in the 2nd inning against Alabama game in Oxford, Miss. on Saturday, March 16, 2019. (Bruce Newman, Oxford Eagle via AP)

OXFORD – Just hours removed from the cleanest pitching gem of the year, Saturday at Swayze Field was very different. Ole Miss starting pitcher Zack Phillips failed to get out of the second inning in a game that saw the Rebels trot seven different arms to the mound, losing 8-6 to Alabama.

“Just a bad game. To be honest, I’m not even taking any credit away from them, but I don’t think they played very well either,” said Ole Miss head coach Mike Bianco. “It was just a bad baseball game all the way around, but they just did more than we did.”

Junior lefthander Zack Phillips hobbled through the opening stretch of the game, making it just 1.2 innings on the mound for his start. After looking to potential revitalize himself after a seven-inning game with only one earned run last Saturday, Phillips walked four of the opening ten Alabama batters.

Mike Bianco was quick to pull the trigger on the junior college transfer. His final line: 1.2 innings pitched, one hit, four walks and one strikeout. Alabama scored two in the frame, but Phillips wasn’t credited with earned runs due to an error on shortstop Grae Kessinger.

Having to yank Phillips early, it was a classic bullpen day Saturday at Swayze Field. With Will Ethridge going six full innings Friday night, the Rebels had a bevy of fresh, good arms ready to go Saturday afternoon. They needed them, throwing seven total pitchers in this game.

“We allowed too many baserunners on and didn’t catch it well enough. We made the game too hard,” Bianco said.

It was just one big inning from the Ole Miss offense kept them alive in this game before Alabama took control late.

Ole Miss scored five runs in the bottom of the second inning. The Rebels simply shelled Alabama starter Brock Love, who came into Saturday with an ERA of just 0.55 on 16.1 innings of play. Love had walked just four batters and hit just one this year before coming to Swayze. In his 1.2 inning start he walked three batters and hit two, leading to the five-run inning and Love’s quick replacement.

All nine batters came to the plate in the second inning, with RBIs coming from four of the leadoff five in the lineup. Anthony Servideo was especially impressive in this one, going 2-2 with a walk, a hit by pitch and an RBI.

Alabama’s scored four more in the top of the fourth, most off reliever Taylor Broadway, to take the lead. In the bottom half of the inning Servideo went first to home on a ground ball that got by the Alabama second baseman for an error to tie the game.

Drew Williamson for Alabama broke the tie in the top of the eighth with a two-RBI double off of Ryan Olenek that snuck between Tyler Keenan and the third base bag. Ole Miss had a chance to go ahead in the bottom of the eighth, before Thomas Dillard grounded into a double play with two men on to end the inning. Dillard is a potentially concerning 0-6 from the plate in SEC play, albeit a small sample.

“We just have to bet better all around, honestly,” Servideo said. “We need everything to start clicking, our pitching and our hitting… I don’t think we’re pressing. But when we have runners on, runners in scoring position, we need to find a way to get them in.”

The Rebels return to Swayze Field Sunday at 1:30 p.m. to close off the series with Alabama.