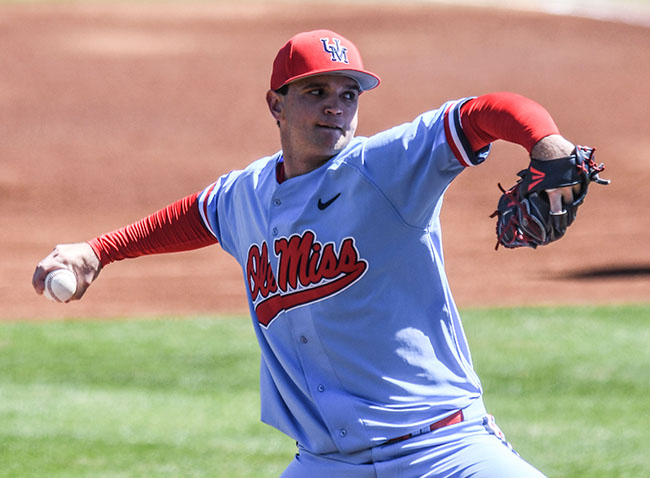 OXFORD – Capping their first SEC series with a win, Gunnar Hogland was electric in Ole Miss’ 12-2 win over Alabama. Ole Miss got 12 runs in just two big innings on Sunday to defeat the Tide and improve to 2-1 in the Southeastern Conference.

Hoglund threw a gem on Sunday. The true freshman came into the day with a batting average against at a very poor .355 through 14.1 innings of work on the year. In 5.0 innings on Sunday he allowed just two hits and one earned run.

The command Hoglund showed on his pitches Sunday was truly impressive. Hoglund walked two batters and struck out eight, throwing 65-percent of his pitches for strikes. Hoglund came into the afternoon with eight strikeouts on the season; against Alabama he struck out eight in the first five innings.

An Anthony Servideo RBI single got the Rebels on the board first in the bottom of the third, scoring Tim Elko from second. Servideo’s hit ignited Ole Miss’ offense. They sent 11 runners to the plate in the seven run third inning. Alabama made two pitching changes in the frame as starter Wil Freeman was credited with four earned runs and first reliever Kyle Cameron credited with three.

Ole Miss would add five more runs on in the fifth inning, four of the RBIs in the inning on balls that Alabama lost in the sun for Rebel hits. It’s now back-to-back days in which the Rebel bats have jumped early on an Alabama starter who entered the game with incredibly impressive numbers. Freeman sported a 1.56 ERA through 17.1 innings prior to this afternoon and he would make it just 2.1 innings.

Ole Miss returns to action on Tuesday for a two-game mid-week series with the University of Arkansas at Pine Bluff. Tuesday’s game is at 6:30 p.m. and Wednesday’s is scheduled for 4 p.m.