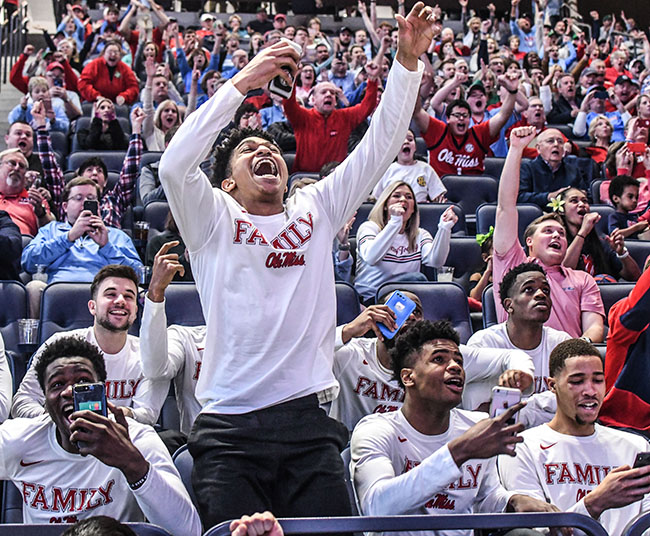 OXFORD – Ticket? Punched. For the first time since 2015, Ole Miss hoops is going to dancing. A eight seed in the South region, Kermit Davis’ squad officially got word that they locked in their at-large bid to the NCAA March Madness Tournament during Sunday’s Selection show.

Ole Miss will face nine seed Oklahoma on Friday in the round of 64 from Columbia, S.C.

“When you go through the weekend and you just never saw our name. That’s a good feeling this time of year when you just don’t see it . You’re talking about the first and second seeds and the bubble teams. I thought we were safely in,” said head coach Kermit Davis. “It was about kind of what we expected.”

Despite their early exit from the SEC Tournament on Thursday when they blew a 14-point halftime lead to Alabama, Ole Miss’ resume was undeniable. The Rebels entered Selection Sunday ranked No. 36 in the NET with five quadrant one wins. At 20-12, 10-8 in conference play, the Rebels continued the selection committee’s trend of never leaving out a 20 and 10 SEC team.

“As a kid you always dream about making the tournament. It takes a lot of work to get there. We’re finally in,” said junior guard Breein Tyree. “I haven’t slept since we lost to Alabama. I’ve been nervous since then… when I was in high school I remember kids used to watched in class on their laptops during class, teachers yelling at kids for watching on their phones as they’re going to the bathroom watching games. This is where you showcase what you can do and just thank god for that opportunity.”

Two wins over SEC Tournament Champion Auburn proved critical for the Rebels not only making the NCAA Tournament, but doing so without having to travel to Dayton for the play-in round. Ole Miss beat now 26-9 Auburn twice on the year, by 15 at home and by 5 at Auburn.

Auburn going on to win four straight in the SEC Tournament, including a championship domination over No. 8 Tennessee 84-64, significantly boosted the Ole Miss resume.

“It’s a terrific day for Ole Miss basketball. We’re gonna play an unbelievably well coached team Lon (Kruger) has been there a lot of times,” Davis said. “Oklahoma will be like a really good SEC team that we’ll play. I’m sure they’re probably like us – they’ve seen us play a little bit on TV but we’ll dive into it tonight and tomorrow.”

This is the first NCAA Tournament for Ole Miss since 2015 when they lost to Xavier by 19 points in the round of 64. It’s only the ninth time in program history making the tournament.

Oklahoma represents about as good of a matchup as could be for the Rebels. When Ole Miss has struggled the most this year came to teams that can rebound the ball – Oklahoma is among the worst rebounding teams in the Big12. The team ranks last in the Big12 in rebounds allowed.

However, it’s a Sooner team that has proven capable of winning big games on the year. For a 19-13 team, they’ve played one of the harder schedules in the country. Just two weeks ago, they knocked off No. 13 Kansas, winning by 13.

“Very good guards. They have an undersized five-man, (Kristian) Doolittle, who really takes advantage of mismatches at 17- or 18-feet,” Davis said. “They maybe don’t have some of the length at the rim that a lot of SEC teams, but boy are they put together. Lon (Kruger)’s done such a good job with them. They’re such a good team.”

We will continue to update this story as times of game and more information roll in.