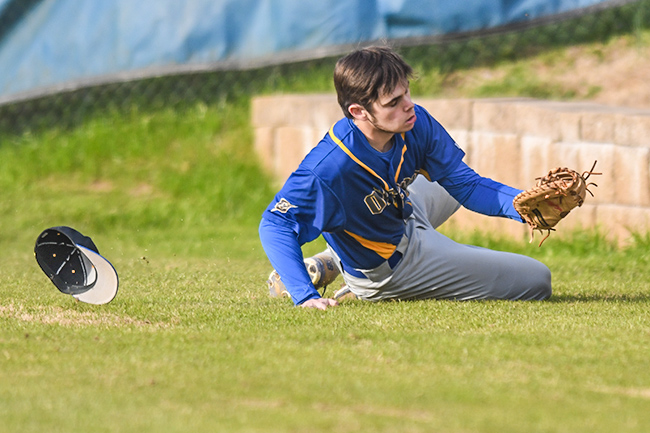 OXFORD – In a crosstown, junior varsity doubleheader, Oxford baseball won two games over Lafayette on Monday evening, winning 2-1 in the first game and 5-0 in the second.

“They were much better today. Some of these JV kids haven’t been taking it as an opportunity to a) get better and b) try to work their way into some varsity playing time,” said Oxford head coach Chris Baughman. “We have some freshman that are looking at it that way. They played much better today.”

Oxford eighth-grader Will McClure came to the plate with bases loaded in the bottom of the fifth in a tied, abbreviated game. Facing a full count, McClure took the Lafayette pitch to the gap between first and second, scoring the runner from third for a walk-off win. Both Lafayette and Oxford’s starting pitchers excelled in game one, leading to the tie, 1-1 game before McClure’s walk-off.

Both games of the doubleheader were just five innings.

For a sport so often defined by impressive hitting or pitching displays, it was really the defenses for both Oxford and Lafayette that shined on Monday night.

Oxford first-baseman Hays Larson was really impressive, making a handful of catches in foul-ball territory. Their left fielder also made a very nice diving catch in the fifth inning to keep the first game tied at one. The Commodores made a pair of really nice plays in the infield, including one double play to end an inning with two Oxford baserunners on.

“We spent about two or two-and-a-half hours today working on lots of defensive situations,” Baughman said. “They played so much better today than they did Saturday.”

“The two guys that threw today threw great. They stayed in the zone and kept the ball down. Joe maybe threw four balls above the belt. They got easy, lazy foul balls and ground balls and we made some good plays behind them,” Baughman said.

Lafayette’s starting pitcher for game one, sophomore Russell Cook was also very notable. Cook went the full first game for the Commodores, holding Oxford to just one run until the walk-off. Pitching in the second game was more of a struggle for Lafayette, as their three arms combined to allow three hits and five runs to Oxford, walking four more.

“Really, it’s a great opportunity to get these guys some at-bats. Our pitchers were really good today,” said Lafayette coach Robert Berry. “(Cook) threw great, but really we have to get more production out of our offense. But Russel’s pitching performance was good. He was really in control and he only gave up a few runs.”

Coaches from both sides harped on the importance of playing these junior-varsity doubleheaders, especially cross-town games against the rival. It’s an opportunity for younger players to get valuable, live at-bats as well as gaining experience playing the rivalry games.

Both schools enter regional play this week. Oxford and Lafayette will meet again later in March when the varsity teams face off on March 20.