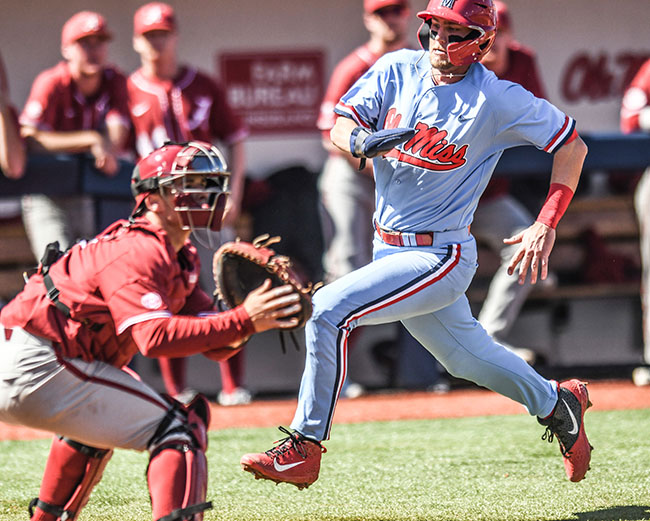 OXFORD – Ole Miss took their first SEC series on the year this past weekend, beating Alabama two games to one to get to 14-6 on the year. Ole Miss took game one 1-0 in a shutout, pitchers dual on Friday before dropping game two 8-6. Head coach Mike Bianco’s Rebels rebounded on Sunday, dominating Alabama start-to-finish to take the series, winning 12-2. Now one week into SEC play, here’s what we learned from the start of conference games.

1. Gunner Hoglund is ready for the big stage

The true freshman pitcher was a big of a question mark coming into the weekend, but boy did he show up for Ole Miss on Sunday. Coming into the weekend, Hoglund was giving up a lot of hits; his .335 batting average against suggested his ERA should’ve been much worse. Sunday against Alabama was quite different.

Hoglund was in control from start to finish of his 5.0 inning start on Sunday. In his opening 14.1 innings of work this season, Hoglund struck out eight batters. In five innings on Sunday, he struck out eight more. He allowed just one earned run in the start.

It’s a really impressive outing in SEC for a true freshman, but one the Rebels had high hopes for. Hoglund continuing to pitch like the kid the Pittsburgh Pirates thought he was when they drafted him in in the first round in 2018 could be a real game-changer for Ole Miss moving forward in conference play.

Saturday against Alabama, Phillips made it just 1.2 innings into the game, walking four and giving up a hit. Bianco had a short leash Saturday and is now moving on. Bianco said he’s not sure who will start this Saturday on the road at Missouri. Look for Doug Nikhazy, another true freshman who has been very impressive in 17.1 innings of work so far, to potentially fill that role.

Ole Miss was not hitting the ball well to open the series against Alabama, scoring just seven runs in the opening two games. Mike Bianco made a few significant tweaks to the lineup card going into Sunday that seemingly had a big effect. The Rebels scored 12 runs on Sunday in the new order.

Anthony Servideo moved into the leadoff spot Sunday, replacing Grae Kessinger who batted second. Tyler Keenan was moved further down the lineup, swapped with Cole Zabowski who batted third. The moves saw some improvement in the bats, granted the sample size is small with one game.

Make no question about it, Alabama is not one of the better teams in the Southeastern Conference. That said, you can never expect a sweep in SEC play. The way Saturday’s loss went down wasn’t pretty, but Ole Miss responded on Sunday to get the series win, taking two of three from the Crimson Tide.