Another’s eyes: What to know about Oklahoma hoops through the eyes of Oklahoma media 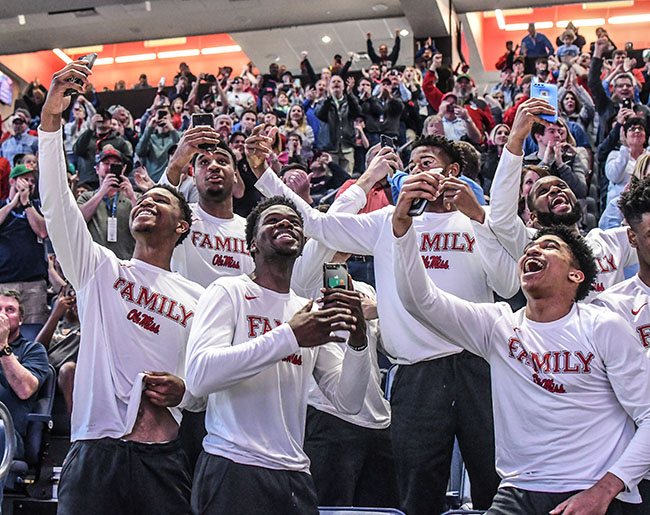 Leading into NCAA Tournament week, the EAGLE took some time on Monday to talk to some members of the Oklahoma media. Learning from those in Norman with some more inside information, here’s some notes on what to expect from Ole Miss’ NCAA Tournament opponent, the Oklahoma Sooners.

Like the Rebels, Oklahoma has been a team that has struggled rebounding the ball on the year, often due to their basic lack of size on the interior. Of Sooners who average 20 or more minutes per game, only one is taller than 6-foot-7. Sophomore Brady Manek, at 6-foot-9 and 222-pounds, is a little light for players of his typical height. For reference, Ole Miss’ Bruce Stevens stands 6-foot-8 but weighs 252-pounds.

Senior, 6-foot-10 forward Jamuni McNeace was supposed to play a bigger role for Oklahoma this year after averaging 6.8 points and 5.4 rebounds in 18 minutes as a junior. With an increase to 28 minutes as a senior, those numbers would project to rise to around 11 points and 9 rebounds. Instead, he’s regressed, leaving a gap in the center for the Sooners.

Oklahoma is one of the worst offensive rebounding teams in the nation. The Sooners are tied for 238th in the NCAA in offensive rebounds per game – only 10 power-five teams are worse. The Oklahoma bigs being able to rebound on Bruce Stevens and Dominik Olejniczak, who have had their own rebounding struggles, may be the key to the game.

For a team that is very guard oriented, similarly to Ole Miss, Oklahoma has had a lot of games in which they have not shot the ball well . The team shoots near league-average in percentage from the arc. However, they are the worst team in the Big12, by a decent margin, in three-pointers made per game.

Freshman Jamal Bieniemy leads Oklahoma in three-point percentage at an impressive 40.6-percent. However, four Sooners, none of whom shoot over 36-percent, shoot more threes per game than Bieniemy.

Brady Manek is the team’s most volatile, but arguably the most important shooter. Manek averages 4.6 three-pointers per game, hitting at a clip of 35.4-percent. He’s had games against Notre Dame and Iowa State, where he’s converted on five or more threes. However, Manek has also had games like those against Dayton and Wichita State where he goes 0-5 from the arc.

“Brady Manek is about as inconsistent as you can ask from a three-point shooter. But when he’s shooting well, like when they beat Kansas a few weeks ago, then they’re really tough,” McComas said.

As silly or cliche as it may sound, a lot of NCAA Tournament games come down to who’s making and who’s missing shots. And according to McComas, Oklahoma is the definition of a make-or-miss team. Some nights it looks really good. However, it can also be ugly at times, such as the 20-point loss to a mediocre Wisconsin team or the 30-point loss at home to Baylor.

“They’re extremely hot and cold. It seems like they’ve shot lousy a lot more than they’ve shot well,” McComas said. “When you can really defend, especially on the perimeter, (Oklahoma) is going to have a whole lot of issues.”

Defensive analytics rank Oklahoma as one of the better defending teams in college basketball. While not big and therefore not great rim protectors, the strength of the Sooner defense that ranks No. 23 nationally in defensive efficiency according to Kenpom, lies on the perimeter.

Jamal Bieniemy and Rashard Odomes are the top defenders that will stand out individually, but it’s a team without a weak link on the defensive end. Unlike past years – they ranked No. 85 in defense last year by Kenpom metrics – Oklahoma took pride in guarding this year.

“Last year they were one of the worst teams nationally on the defensive end because Trae Young was awful on that side,” McComas said. “They made it a point this year to say ‘ok, if nothing else, we’re going to defend you.’”

The Sooners’ ability to shut down the strength of the Ole Miss perimeter, in guards Breein Tyree and Terence Davis, will be another one of the keys that will define the opening round.

Kermit Davis has clearly turned this team around from work put in both on and off the court with this Ole Miss team. However, his demeanor on the court is quite different than what we’ll see from Oklahoma head coach Lon Kruger. It’s not a bad thing, by any means; it’s just different.

Where Davis is quick to yank the leash on players, often making quick substitutions and coaching very emotionally, Kruger is the cool-headed, relaxed coach.

“Lon is always consistent. He never yells at anyone during the game and hardly gets on the referees. He’s the most positive coach that you’ll ever meet,” McComas said. “He’s always positive and the message is always the same.”

Davis was confident in the team’s placement in the NCAA Tournament, telling media there was “zero stress” about making the bracket after their loss to Alabama. However, Kruger sensed a little doubt at his season ending banquet. Both made it in the tournament safely.

The coaching styles may be starkly different, but there’s a lot of similarities between the 2019 iteration of the Ole Miss Rebels and their opening round opponent in Oklahoma. Friday’s showdown in Columbia, S.C. is set to tell an interesting story.