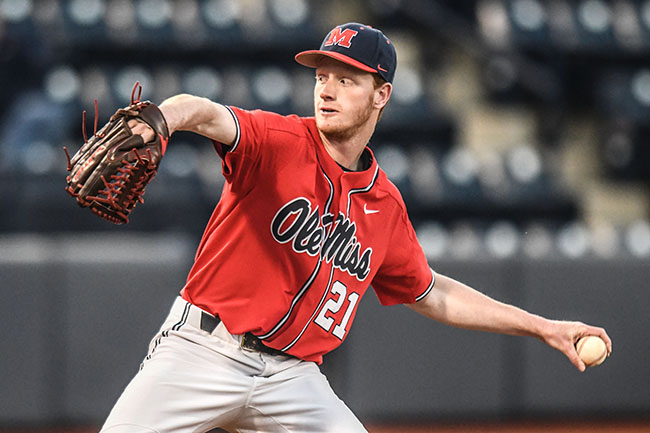 OXFORD, Miss. – Ole Miss baseball needed just seven hits to make it out of Tuesday night’s game early with a 12-2 victory over Arkansas-Pine Bluff. The Golden Lions granted the Rebels 11 free passes to first base with six walks and five hit batters and allowed Ole Miss an easy night at the plate, who had just two hits to match 10 runs at one point in the fourth inning.

Sophomore Jordan Fowler delivered his best outing of the young season, carrying a no-hitter through 5.2 innings and setting a new career high with 7.0 innings pitched off the start. Fowler was unwavering in his deliverance through the first six innings, holding the Golden Lions scoreless on a lone hit and a pair of walks.

Fowler’s pristine night came under threat in the seventh, when he allowed three leadoff hits in the inning, but nifty defensive play by his middle infielders behind him and an inning-ending double play ensured that one run allowed would be all against the southpaw. He would finish the night with six strikeouts, a new season best and one off his career high.

Senior Ryan Olenek led the team in hitting, tying his career best of four hits and setting a new career high with five RBI, as part of his 4-for-5 night at the plate. Olenek alone accounted for over half of the Rebels’ hits tonight, and he also claimed the first two hits of the night for either team with two hits in a six-run fourth inning.

Olenek was responsible for six of the Ole Miss runs, with a run to go along with his five batted in, and ensured an early night’s sleep with a walk-off two-run, two-out single in the eighth inning after a 10-run rule was implemented.

Redshirt junior Ray Falk entered the box score with his first career outs recorded tonight, finishing the night out for the Rebels on the mound with a one-run eighth inning. After Fowler’s 96th pitch ended his day at the conclusion of the seventh, Falk entered for the final frame, and, after allowing a one-out solo home run, recorded his first career strikeout for the second out of the inning.

Poor opposing pitching allowed for minimal offensive output from the Rebel bats. The Golden Lions starter, Daniel Walsh, was not able to record an out in his outing, walking the first three Rebel batters he faced. Ole Miss would go on to send four runs to the plate in the opening frame, all without a hit.

The UAPB arms would again grant the Rebels some more free passes three innings later, in the fourth. Ole Miss plated six in the inning, all with two outs, after the UAPB pitcher allowed five consecutive Rebels to reach freely.

Jacob Adams, Carl Gindl and Anthony Servideo all reached on a walk, while Tyler Keenan and Chase Cockrell were HBP to keep the runners moving on the base path. Olenek recorded his second hit of the inning to send two more runners home, on a two-run double into left field, and the Rebels exited the fourth inning with a 10-run cushion.

Olenek would reappear with the next two runs scored, on his game-ending single in the eighth inning. Grae Kessinger set the table with a one-out double down, ripped down the left field line, and Michael Fitzsimmons was hit by a pitch to represent the game-ending run.

Ole Miss will be back in action for the second of two midweek games against the Golden Lions, with a first pitch tomorrow that has been moved to 3 p.m. CT.

Quick Hits
– Ole Miss improves to 15-6 on the year, and 11-3 all-time against UAPB.
– Ole Miss has recorded double-digit run totals nine times this season, including back-to-back 12-2 wins.
– The Rebels reached base freely eleven times today, with six walks and five hit batters.
– Ole Miss has scored more than three runs in one inning now 24 times on the year, with a pair of big innings in today’s matchup.
– Jordan Fowler set a new career-best with 7.0 IP today, and was one off his career high of seven strikeouts, with six on the night.
– Ryan Olenek had a career day at the plate, tying his career high of four hits and recording a new career best with five RBI today.
– Olenek accounted for four of the Rebels’ seven hits in Tuesday’s game.
– Ray Falk recorded his first full inning pitched today, with a one-run eighth that included his first career strikeout.

Another’s eyes: What to know about Oklahoma hoops through…