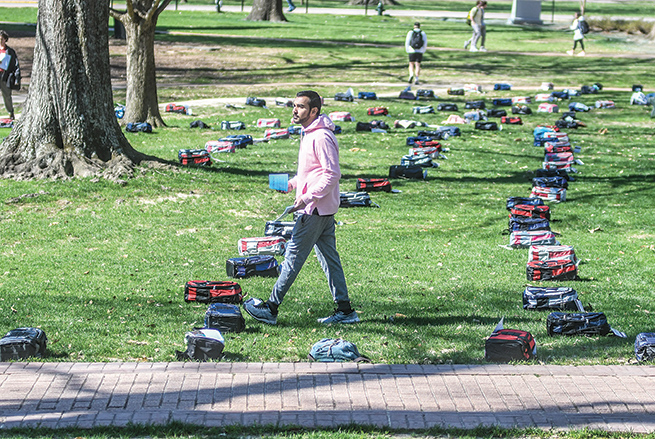 Sunny Patel looks over backpacks placed on the ground during Send Silence Packing at the Grove in Oxford, Miss. on Tuesday, March 19, 2019. (Bruce Newman, Oxford Eagle)

For the second year in a row, Ole Miss students have brought mental health awareness and the issue of suicide prevention to their campus. The Ole Miss chapter of Active Minds held their second ‘Send Silence Packing’ exhibition at The Grove on Tuesday.

With over 1,000 backpacks displayed across The Grove, the goal is to help start a conversation about mental health. Some of the backpacks had stories about people who have lost their battle with mental health or other issues attached to them for students and others to read as they walked through the exhibit.

Active Minds is a national nonprofit organization that promotes mental health awareness and education on college campuses. Their goal is to break the stigma of mental illness among college students by increasing awareness of mental health. Ole Miss formed their chapter in 2016 and held their first ‘Send Silence Packing’ event last spring.

“We’re really thankful and honored that they came back here again. It was a really monumental event last year,” Katherine Sistrunk said. “It had a lot of great, positive feedback and we’re excited to host it for a second year.”

Sistrunk is a founding member of Ole Miss’ Active Minds chapter and is the chairman of the ‘Send Silence Packing’ event. She joined Active Minds without having dealt with mental health problems herself or any personal attachment to the issue. After experiencing a friend who was suffering from mental health issues after their brother died from suicide it ‘opened her eyes’ and Sistrunk decided to get involved.

Other organizations joined in Tuesday’s event along with Active Minds. Right Track, an Oxford-based medical group that provides outpatient Mental Health services, Communicare MS and the American Foundation for Suicide Prevention were the off-campus groups that participated along with The Ole Miss counseling center.

“We just hope that students come and see how mental health affects everyone in some shape or form and that there are resources on campus for them if they need help,” Sistrunk said. “We’re just getting that word out that they’re not alone.”

Active Minds provided the backpacks with a mix of national and local stories being represented. One backpack did have connection to Ole Miss with one representing former student Rivers McGraw. McGraw, the former Jackson Prep football player who transferred to Ole Miss after originally attending Mississippi State, died in the fall of 2016 after a battle with addiction. McGraw’s mother donated a backpack in her son’s honor for last year’s inaugural event.

The event lasted six hours, beginning at 11 a.m. and ending around 5 p.m. with students who were hurriedly walking to their next class as well as tour groups of prospective students and their families seeing the massive exhibit of backpacks strewn about the campus’ centerpiece.

“A lot of students didn’t expect to see this in their morning walk to class, but we had a lot walk by and say ‘thank you so much,’ Sistrunk said. “A lot of students don’t think about mental health or see it as an issue. They see this and their minds are changed.”

For those who would like to receive more information about Ole Miss’ chapter of Active Minds can visit activeminds.org/chapter/university-of-mississippi/.