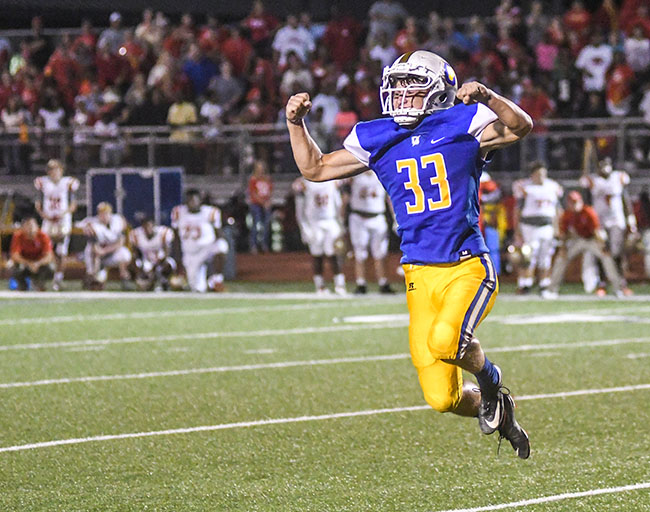 Oxford High kicker Jack Tannehill (33) reacts after his 27 yard field goal with 3.5 seconds remaining gave the Chargers a 29-27 win over Lafayette High at Bobby Holcomb Field in Oxford, Miss. on Friday, September 7, 2018. Tannehill decommitted from Ole Miss on Tuesday and reopened his recruitment.

Going on the road to open regional play, the Chargers manhandled Columbus in every since of the word Tuesday night, winning by a final score of 20-1. It’s not new for Oxford to simply bully the Falcons in baseball. Last year they swept Columbus in three games, winning by an aggregate score of 39-2.

Hays Roth got the start on the mound in Tuesday’s game, making it through the fourth inning and allowing just one run. Roth also had 2 RBIs on the night. Bo Gatlin, John Harvey and Alex Childers were among other Chargers with multiple-RBI games.

Also opening regional play on the road, Lafayette’s comeback bid fell short in Grenada, losing 9-5. The Commodores made it close at the end, scoring three runs in the sixth inning. Tyrus Williams and led the way for the Commodores in this one, personally recording two of the four hits for Lafayette in the game. Lafayette doesn’t have to wait long to get their chance at redemption – they play Grenada again on Friday, this time at home.

Oxford junior running back J.J. Pegues took to Twitter on Tuesday, announcing that he has been invited to play in one of the more unique high school All-Star games in the country, the Hawaii Tiki Bowl. The game bills itself as an experience to “play for college coaches while joining teammates from across the USA. Pegues, a four-star athlete according to 247Sports, has offers to play football at Ole Miss, Alabama and Auburn, among others. The game will take place in January of 2020.

Oxford sophomore kicker Jack Tannehill received his first, big-time college scholarship offer on Tuesday, announcing on Twitter that he had received an offer to play football at Ole Miss. In his two years kicking for Oxford football, Tannehill has made 52 of 53 extra point attempts and 15 of his 21 field goal attempts. Tannehill’s in-game career long is 44-yards. However, he kicked successfully from 57 yards in a Twitter video posted in January, showing he’s more than capable of growing into the leg-strength needed to kick at the next level.

In another dominating performance on the year, Oxford tennis beat Tupelo on Tuesday, winning by a dominant final score of 6-1. The Chargers move to 5-0 on the season with the win. Eighth grader Rowan Derva was fantastic for Oxford in this one, winning his singles match by a score of 6-0, 6-1, dropping just one game to his Tupelo counterpart. The Oxford girls doubles team of Emmie Stevens and Mary Margaret Shipman were sensational as well, winning 6-1, 6-0.

The Lady Chargers have had an up-and-down start to their year, but have played a challenging and fun schedule to date. Entering region play Thursday at Grenada, the girls sit at 6-5 and are returning home from a tournament played at the ESPN Wide World of Sports in Disney. The Commodores went 2-2 in their spring break trip at Disney, beating Lutheran Southern Academy (TX) and Second Baptist (TX).

Terence Davis, Breein Tyree and the value of veteran…