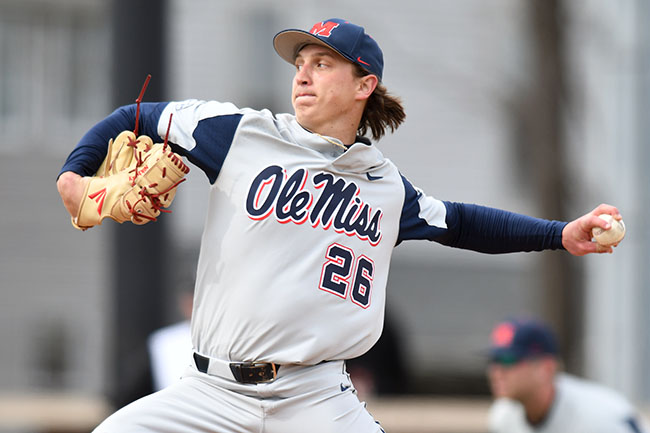 After their dominating mid-week performance against Arkansas Pine-Bluff, Rebel baseball is now 4-1 since the start of conference play last week against Alabama. Ole Miss’ opening weekend had some bright spots as well as moments of concern. This week, Ole Miss will make a few major changes, going into Columbia, Missouri against a team that sits winless in the SEC.

First Base: Will mid-week domination hurt the Ole Miss offense?

At times, the mid-week series resembled more of a home run derby than an actual setting of a baseball game. Ole Miss hit six home runs and added six more extra-base hits in the 25-0 domination on Wednesday, but did so against pitchers who were simply inferior. The Arkansas Pine-Bluff pitchers had more than a handful of balls dip into the 60-mile-per-hour zone, simply something you don’t see in SEC play.

Scheduling these sorts of games in the middle of SEC games could be damaging, as the potential to alter timing at the plate is legitimate. We will see on Friday how damaging the mid-week series could prove for the bats.

Mike Bianco had a short leash last Saturday with starting pitcher Zack Phillips. He doubled down on his feelings about Phillips’ performance on the year by making a Saturday pitching change one week into SEC play. True freshman lefthander Doug Nikhazy will take over on the mound this Saturday, making his first ever start against an SEC opponent.

Nikhazy has been one of the best bullpen arms for Ole Miss on the season and has shined when given the opportunity to start. In eight appearances, Nikhazy has currently has an ERA of 4.15 and has started twice. Nikhazy got the start last week against No. 7 Louisville, giving up two runs in the first before pitching five innings with three earned runs.

Last week, in their SEC opening series at Arkansas, the Tigers struggled offensively. In three games, Missouri scored just five runs on the Razorbacks. It’s a team that’s played really well at times against worse opponents, scoring double digit runs in six of 13 wins. However, they’ve lost some pretty baffling games, including two losses against North Florida and one each to Northeastern, South Dakota State and Rhode Island.

Dillard left Tuesday’s game against Arkansas Pine-Bluff after an ugly, first-inning collision on the base-paths. He stayed in the game to finish base running but would be subbed out during the change of innings. After the game, Dillard said he jammed his neck and would be fine moving forward. He sure did look fine on Wednesday, hitting a home run and drawing two walks in the Ole Miss blowout.

The Rebels take the field in Columbia, Missouri for the first time in the season on Friday at 6 p.m., televised on SEC Network. Will Ethridge will make his typical Friday start, putting his blistering 4-0 record with a 0.46 ERA on the line against the Tigers.