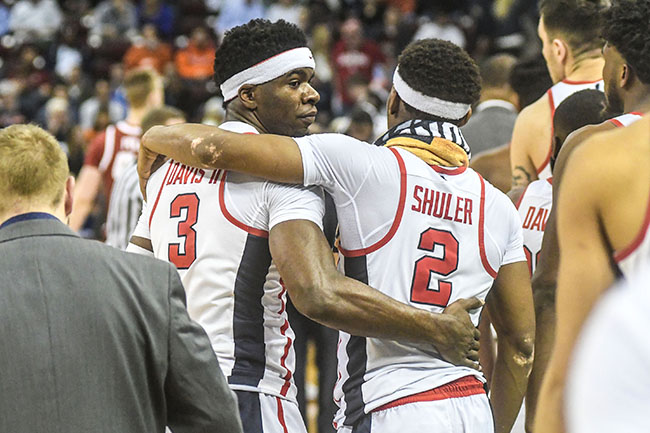 Ole Miss guard Terence Davis (3) hugs teammate Devontae Shuler (2) as he walks off the court for the last time as an Ole Miss player following a 95-72 loss in an NCAA Tournament first round game at the Colonial Life Arena in Columbia, S.C. on Friday, March 22, 2019. (Bruce Newman, Oxford Eagle via AP)

COLUMBIA, S.C. – Standing around the circle, waiting on the tip of their NCAA Tournament opener with Oklahoma, Ole Miss looked tight and nervous. The first time in the tournament for each of the Rebels, it showed in Friday afternoon’s tournament exit.

Ole Miss acknowledged the lack of inexperience going into the tournament, but never made it seem like it would be a problem. The duo of Breein Tyree and Terence Davis had played 98 games of basketball together in an Ole Miss uniform, but it was the lack of minutes at the highest level that haunted them.

“I do feel like experience is a big thing in anything you do. We’re experienced guards and we played a lot of college basketball, but this is our first time in the tournament,” Tyree acknowledged before the team’s practice on Thursday.

Yet, despite the amount of basketball experience the Rebels had, when the lights turned on in Colonial Life Arena on Friday, they looked borderline scared.

Turnovers are a tell-tale sign of a team playing over their head and full of nerves. The Rebels committed nine turnovers, leading to 12 Oklahoma points, in the first half alone. The Sooners committed just one.

Still fouls were another issue for the Rebels, yet another sign of inexperience. Ole Miss committed a bevy of those against Oklahoma. Four different Rebels committed three or more fouls, with Breein Tyree and Bruce Stevens getting four apiece.

Bruce Stevens started the second half on the bench with three fouls. Kermit Davis brought him in with 17:05 left to play in the half and Stevens committed his fourth foul merely fifteen seconds later. Purely a silly play by a senior who should know better.

Settling down after a miserable start, Ole Miss played better at times in the second half. However, they hole they had dug themselves in early proved far too much to overcome. After committing nine first-half turnovers, they committed just two in the second half.

Ole Miss isn’t exactly a young team. Over 57-percent of their minutes come from upperclassmen and only 23.8-percent come from freshman. It’s just a team that lacks experience playing in big moments. Not one Rebel has played in the NCAA Tournament, and they’ve played in just one NIT Tournament together.

Similar issues reared its head last weekend in Nashville, when the Rebels blew a 14-point halftime lead to Alabama to lose in the opening round of the NCAA Tournament. The Rebels never gave up in this one, but they couldn’t defend whatsoever.

“I believe experience played into (the start). I have no problem admitting that,” said Ole Miss forward Blake Hinson. “Oklahoma is a good team and a good squad. That’s what we’re trying to build for this program. The more experience we get inside this tournament, the further we’ll go. And we’re tying to win it – I’m trying to win this tournament.”

Positive news for Ole Miss moving forwards is this team now does have this NCAA Tournament experience going into next year. The team will return two of its top players in Tyree and Shuler, a guard duo that should be poised for another SEC run next year. Losing Terence Davis hurts, but it’s a team that will now be able to return NCAA Tournament and big game experience.

One-and-done: Oklahoma runs over Ole Miss in first round…