Despite early exit, this season was an unquestioned success for Ole Miss hoops 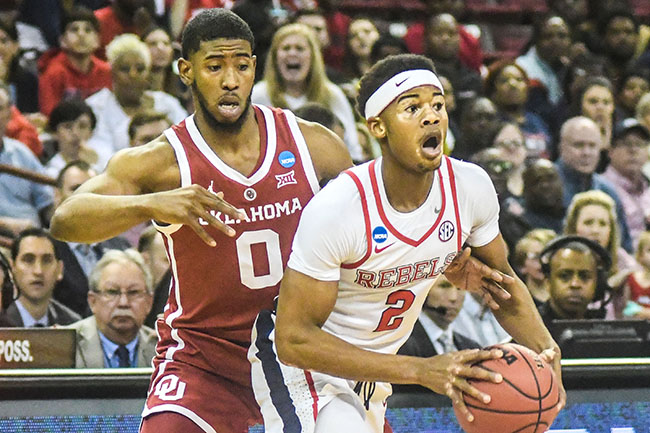 COLUMBIA, S.C. – Post-game after Friday’s loss to Oklahoma in the opening round of the NCAA Tournament was a tough scene. Senior Terence Davis, playing his final game in an Ole Miss uniform, fought back tears. Junior Breein Tyree was not shy about voicing his frustration with his performance in the team’s final two games.

With the season ending in a blowout, it’s easy to harp back to the two final games. Ole Miss let a 14-point halftime lead slip away, losing to Alabama in their first SEC tournament game before getting run out of the court in South Carolina to open their NCAA Tournament. But regardless of the final two outcomes, it’s important to remember how far this team has come in just one season.

“The first time me and coach (met), he looked me right in the eye and told me it wasn’t going to be a rebuilding year. I believed him,” said senior guard Terence Davis. “We all believed. He brought so much success. With me, my teammates and this program, we’re going to do great things at Ole Miss.”

Buying in was critical. In his first year at the helm of Ole Miss basketball, Kermit Davis took a team that had won just twelve games the prior season to a 20-13 record and an NCAA Tournament berth.

However, success isn’t exactly the hardest thing to define. For a Duke or Kentucky, it’s winning the national championship and nothing else. For Ole Miss in 2019, success was merely exceeding expectations, something they unambiguously accomplished. Ole Miss was picked to finish dead last in the SEC entering this season. They finished in a tie for 6th and made the tournament.

“It’s been probably one of the most rewarding years I’ve ever had as a coach, as far as a team maybe overachieving. Our staff did a great job and these (players) did a great job,” said head coach Kermit Davis. “The biggest thing I’ll take away is that I’m so appreciative of how our players and fan base connected and how we grew there. But we’ve got a lot of work to do, there’s no question about that.”

In addition to team success, there was a handful of individual successes along the way, notably in the backcourt. Junior guard Breein Tyree was arguably the most improved player in the entire conference. Making a jump from 25 to 34 minutes per game, Tyree saw his points per game rise by over seven and his efficiency skyrocket. He ended this season as an AP All-SEC Second Team performer, finishing the year as the second-leading scorer in the conference.

For as good as Tyree was, sophomore guard Devontae Shuler’s jump may have been more impressive. Shuler had never played point guard in his life before this season. This year he started 31 games at point, averaging over ten points and three assists.

The season may not have ended the way these players wanted it too, but they’re certainly able to see the progress they made along the way.

“As a player and as a competitor, you want to win every game, especially our first time being in March Madness. But I know when we take a step back, probably a few weeks from now, and we look at what we did this season, we had a great body of work,” Tyree said on Friday. “We all got better as people and as basketball players, on and off the court, this year. There’s a lot of positives, but you never want to be satisfied with losing.”

Ultimately, it’s a hotter start in Oxford than anyone could have expected for the Kermit Davis era. Now the reigning SEC Coach of the Year, Ole Miss’ non-rebuild is ahead of track.

“It expedited fan interest and hopefully it expedites recruiting,” Kermit Davis said. “We have a lot of work to do. We have a lot of holes to fill and we have to get guys better. But I do think it sped up the process.”