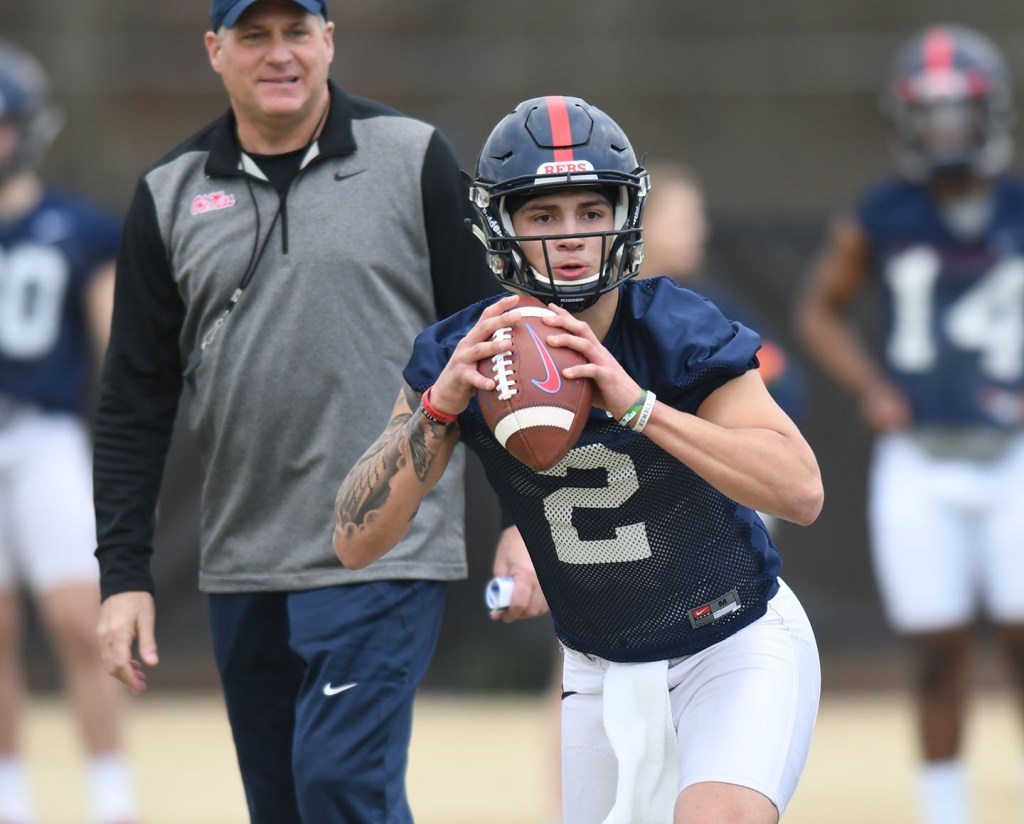 Nearly a week from next Saturday’s Grove Bowl, Matt Luke’s Rebels held spring practice number nine on Tuesday. Tuesday’s practice was mostly a day of correcting mistakes, coming off of their first big intersquad scrimmage this past Saturday.

There’s no doubt the 2019 Rebels will look quite different than last year’s team on both sides of the ball. Installing a new offense and new defense takes time, but it seems like Ole Miss is starting to get a grasp on where they need to be by this time in the spring. Here’s what we’ve learned over the past few open practices.

1. Depth a question at offensive line

Ole Miss has just twelve offensive linemen in spring camp and are awaiting the arrival of seven more true freshman that will come to campus this summer. The center, right guard and right tackle positions seem to be locked down with Eli Johnson, Ben Brown and Alex Givens, respectively. Brown and Givens have both played extensively in the past, but Johnson has made just four appearances in his career.

For the left side, practice has shown a rotation of Royce Newman, Chandler Tuitt and Bryce Matthews competing for two spots. Newman has been playing both guard and tackle. For Luke and Co., the goal is just to find the best five man unit, position independent.

“I’ve always said we’re just trying to find a way to get the best five guys on the field. If that happens with Royce (Newman) at tackle, that’s good. But if it happens with him at guard, it’s very important that he’s a swing-man,” Luke said.  “Obviously injuries happen throughout the season, so having the ability to play multiple positions is very important.”

Luke emphasized that he doesn’t want to count on the freshman coming in this summer on the offensive line, but they probably will need that, to an extent, for depth. Their plan is to leave spring practice feeling good about seven guys.

It’s no surprise that there will be an emphasis on running the ball under new offensive coordinator Rich Rodriguez. His past teams have finished amongst the top teams in the country in that category.

However, it’s not just how he uses his running backs and quarterbacks in the rushing game. Tuesday, it was clear that that the tailbacks will also be used in the passing game, as they were split out wide in many up-tempo passing sets.

“It’s really, again, it’s finding ways to get your best 11 on the field. If that’s spreading those (running backs) out and giving the defense multiple looks, that gives defenses problems,” Luke said. “Giving multiple looks is important.”

Here’s what I saw as the #OleMiss first team offense yesterday at the start of spring practice, with a few relevant subs that got some work with the 1s.

Still a longggggg way till the start of the season (and more guys coming in over the summer) #HottyToddy pic.twitter.com/20gf8Y1yHj

For a while, early on in the spring practice slate, it was clear the defense was in their own heads. Switching to a 3-4 defense under new defensive coordinator Mike MacIntyre was always going to be a learning curve, especially for those transitioning to the outside linebacker position. However, it seems like the defense is starting to settle into their own.

The defensive unit forced a handful of turnovers in Saturday’s scrimmage, including a pick-six from new pass-rushing addition Sam Williams. (P.S. Williams led all JUCO players in sacks last year, a welcomed addition). Luke said the defense is reaching a place where they are finally reacting to what they see and just playing football, rather than thinking too long on every snap.

Ole Miss has no quarterback competition in camp this year. Matt Corral is the clear-cut No. 1 from both what is seen on the field and what the coaches are saying off the field. Corral has been direct, on point, and vocal in practices. It’s clear that he’s not just wrapping his head around this new system, but he has clearly taken the reigns of the QB1.

“What a difference a year makes from where Matt (Corral) got here last year. You can really see the difference,” Luke said. “When you’re just figuring it out, you’re just worrying about yourself – trying to get your job right. When you’ve been in it longer, you’re communicating with your receivers and talking to the offensive line. He’s doing the little things it takes to be a good quarterback.”

Ole Miss will host its annual pro day on Friday morning. Former Rebels entering April’s NFL Draft will work out in front of NFL coaches, scouts and general managers, essentially as a home-combine. While the Ole Miss coaches aren’t directly involved in the pro day, Matt Luke emphasized their role as support staff for the former players.

“Anything that we can help them do, we try. There are a lot of assistant coaches in the NFL coming here and using our meeting rooms, meeting with guys,” Luke said. “Obviously it will be a big day for a lot of those guys. There should be a huge crowd and it should be a big day for Ole Miss football.”

All the big names you can think of – A.J. Brown, D.K. Metcalf, Greg Little and others – have been around practices these last few weeks since the NFL Combine, both hanging out and helping out the current players in practice.

“They all like seeing those guys back around. That’s the thing I like the most. Those guys aren’t just here, they’re out there trying to will their guys and giving and talking. It’s good that they’re around and I think that it’s important,” Luke said.

The pro day will be televised in the form of cut-ins across a variety of television networks on Friday, from ESPN to SEC Network to NFL Network. The Rebels have just a handful more practices to sure things up before they unveil the new-look team to the public on the April 6 Grove Bowl.