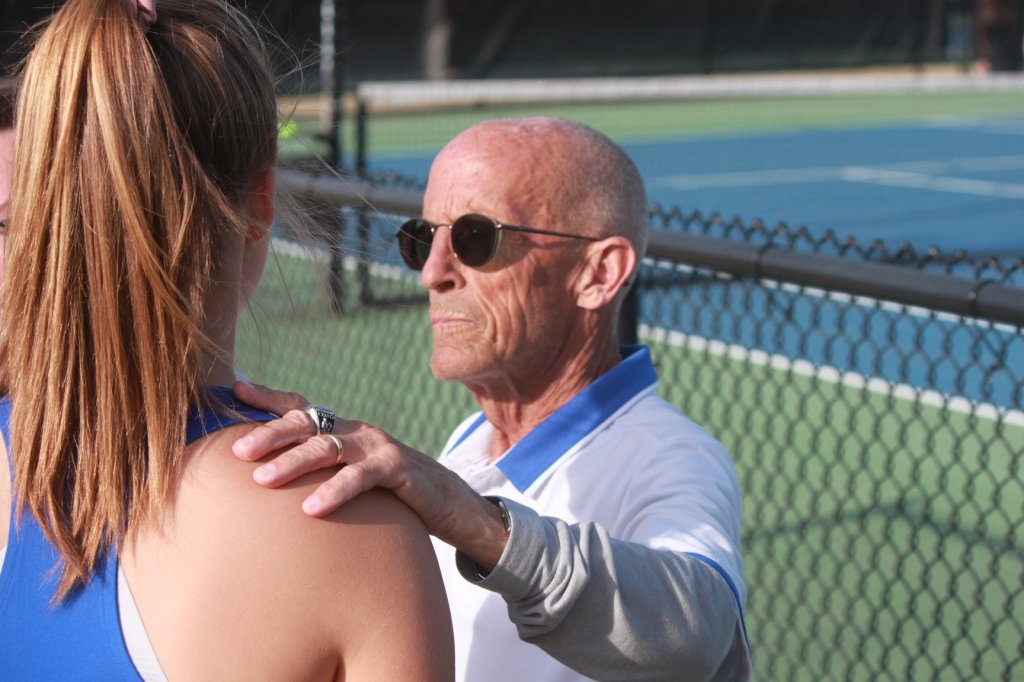 Louis Nash with one of his Oxford girls pre-game before a tilt with cross-town rival Lafayette. March 27, 2019. (Photo via John Davis - OPC)

OXFORD – A cross-town rivalry tilt on Wednesday afternoon turned out to also be a record-setting performance. Oxford tennis downed Lafayette 6-1 on Wednesday in what would be win No. 500 for Oxford head coach Louis Nash, a remarkable achievement in a long career.

“It means I get on the bus with a lot of great kids that are really good at what they do, and have been good for a long time,” Nash said. “Does it mean more? It’s hard to say. State championships mean more.”

Despite the lopsided final score, Lafayette was able to keep in close in a handful of matches. The duo of Dawson Welch and Barrett Childers fell to Oxford’s Downing Koestler and Carter Young 6-4, 6-1 and the Commodore duo of Lucy Wilson and Sara Moore fell to Oxford’s Catherine Bianco and Celie Rayburn 7-5, 6-4.

The most dominant Charger performance on the day was that of Oxford eighth grader Rowan DeVera. DeVera jumped out to an early lead in singles on Lafayette’s Nate Leary and never looked back, winning 6-1, 6-0.

“He keeps balls in. He’s a backstop but he does something with the ball. You can be a backstop and just throw the ball in the court, but he has a purpose in mind,” Nash said. “He is able to put ground strokes where he wants them to go. And the older he’s getting he’s getting stronger. He’s putting more pace on the ball and his first serve is better.”

These matches are a little interesting. Oxford comes in knowing they have a leg up, but it’s different than a standard rivalry. Nash is good friends with the Lafayette head coach Debbie Swindoll, who has coached, privately, some of the Oxford players at times through the years, leading to a unique dynamic.

“I’m not from here, so the Oxford vs. Lafayette… I kind of want Lafayette to do well, because it makes all of us in the tennis community look better. I certainly want Debbie to do well because she’s my friend,” Nash said about the rivalry. “The approach is simple: I want them to play as well as they can possibly play, regardless of opponent. Well that doesn’t happen in this match. Mine put a little too much emphasis on it, and they lose sight of just playing the next point and playing the next ball. We’re trying to win all the points at once.”

Lafayette’s sole win on the afternoon came from Ally Bowen in singles, beating Oxford’s Addie Grafton 7-6, 6-1 in a game where she fell down early. Bowen, one of the better players in the entire state, needed to fight back from a 5-6 deficit to win the opening set in a tiebreaker.

“It’s good for her mentally to start out slow. She struggled but she pulled herself out and played a great second set,” Swindoll said.

With the win, Oxford advances to 9-0 on the season. Lafayette falls to 7-4. Despite the loss, Swindoll was pleased with how her team battled, gearing them up for a handful of important region games that await in the near future.

“If we can compete in these matches, we can handle anyone in 5A. That’s the bottom line,” Swindoll said. “This is going to be the best team we play in the state and I thought we competed pretty well. We didn’t win a lot of matches but we competed. That’s what I was looking for.”