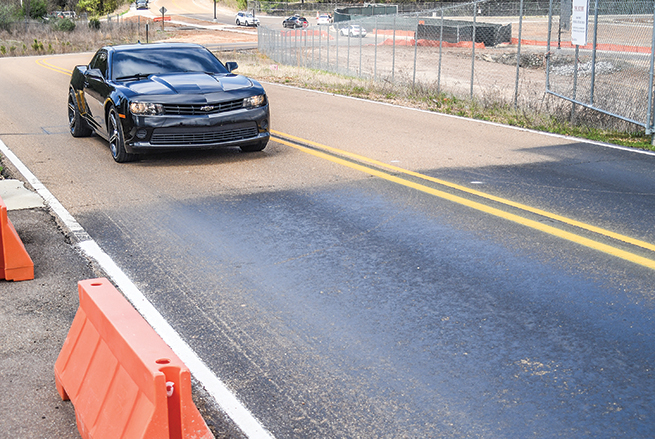 Chucky Mullins Drive has been opened to allow traffic to flow between Highway 6 to Old Taylor Road, in Oxford, Miss. on Monday, March 25, 2019. The opening of Chucky Mullins is one of the stipulations the city required to grant the University of Mississippi's request to close Gertrude Ford Boulevard this summer for a construction project. (Bruce Newman, Oxford Eagle)

The traffic flow on Old Taylor Road has been given some relief. Two months after it was originally scheduled to reopen, a stretch of Chucky Mullins Drive quietly reopened last week.

The stretch of the road connecting Highway 6 to Old Taylor Road had been closed to thru traffic since April of last year to allow for construction of the South Campus Recreation Facility and Transportation Hub. The road was planned to be closed until this January and then reopen, but continued to stay closed until last week.

Earlier this month the Oxford Board of Aldermen discussed a request made by the university to close Gertrude Ford Boulevard for a period of time this summer to construct a retaining wall on the west side of the road. The university planners wanted to close the road from July 8 to Aug. 9.

The city approved the request, but amended the timeline to be July 1-31 and added the stipulation that the university must reopen Chucky Mullins Drive permanently and also reopen All-American Drive on campus for the duration of construction on the Gertrude Ford Boulevard project.

The Eagle reached out to both the city and the university to see if both parties agreed to the new stipulations the Board put on the request, but neither has given a comment on the matter. It is not known at this time if All-American Drive will be open this summer to all traffic.