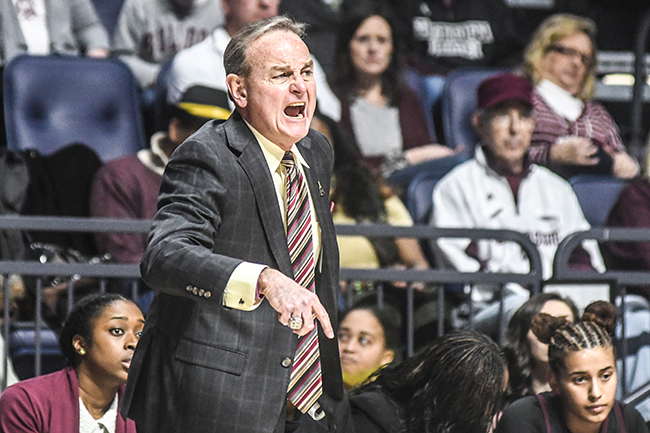 Mississippi State earned the No. 1 seed in the NCAA Women’s Tournament’s Portland Regional. In theory, that should have given the Bulldogs a bigger advantage than they wound up with.

Mississippi State (32-2) is the only one of the four teams in this weekend’s regional from east of the Mississippi River. Portland is more familiar territory for their Sweet 16 opponent Arizona State, and the home turf of No. 2 seed Oregon (31-4).

“Took us four and a half hours to get here,” Mississippi State coach Vic Schaefer said at a press conference Thursday in Portland. “I’m not sure there’s any further place we could have had to go travel to from Starkville to play in the NCAA Tournament.”

If the way back to the Final Four led to the moon, though, it’s a certainty Schaefer and his team would go there. They’ll take on No. 4 seed Arizona State (22-10) in the regional semifinals on Friday night, the first step in the last leg to a third consecutive Final Four appearance.

“Well, we’re very honored to be here. I think we’re deserving of it if we keep pushing,” senior forward Anriel Howard said. “We have big goals, big plans for what we want to do. It’s one game at a time, one game at a time. I think if we just stay focused, we can get the job done.”

Standing in their way are a couple of tough, talented teams with plenty of history with the Bulldogs.

Arizona State played Mississippi State in November 2017 in the Cancun Challenge and lost 65-57. All five starters are back from that team, however, including leading scorers Kianna Ibis (14.0 points per game) and Courtney Ekmark (10.4 ppg). Even though it’s been 16 months since that relatively meaningless early-season game, the Sun Devils made enough of an impression that they have the Bulldogs’ full attention.

“Their five has started 60 games together in a row. She has a heck of a team. Their chemistry, you can tell watching them play, it’s really good,” Schaefer said. “That always concerns you when you play a team like that that’s played together for so long. Their chemistry is good, they have a feel for each other, they know where each other is going to be. They know in certain situations maybe when something is taken away, they know what the counter is. It’s an instinctual thing.”

Mississippi State has a big advantage in the post with Howard and 6-foot-7 center Teaira McCowan. The tallest player in Arizona State’s rotation is 6-foot-3 center Charnea Johnson-Chapman.

Schaefer, however, cautioned that the Sun Devils will not be afraid to challenge McCowan.

“They’re going to be physical with her. They’re able to match her physical capabilities. You might look at them and go, they’re not 6-7, they might not seem as big. Trust me, they are physically capable of handling her,” Schaefer said. “We’ve seen it before. They’re going to really try to do that, use their quickness and athleticism, which they have. It’s an intriguing matchup, for sure.”

The Sun Devils finished fifth in the Pac-12 this season and are one of five teams from the conference still in the NCAA Tournament. One of the others is Mississippi State’s potential regional final opponent, Oregon.

Oregon will play South Dakota State (28-6) in the other regional semifinal Friday night.

If the Bulldogs and Ducks meet again in the regional final on Sunday, it will essentially be a home game for Oregon. Schaefer, however, was confident that Mississippi State’s national success in recent years will help offset some of that advantage.

“Just like anywhere we travel. I think Bulldogs from all over, within driving distance, will be here. This team, our program, has become a real identity for Mississippi State. I’m very proud of that,” Schaefer said. “Our kids really relish that. They embrace it. They understand the responsibility that comes with it. So I expect us to have a great crowd here, to be honest with you. We’ve had a lot of fans everywhere we’ve been. When we were out here in December, we had a lot of fans at the Washington game. I would expect us to have a good turnout out here.”