Final Drive: Ole Miss Pro Day a last chance to play together for those moving on 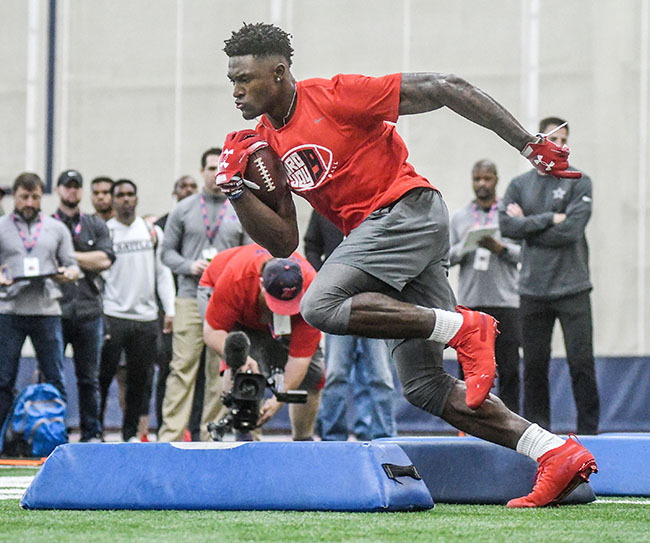 OXFORD – Over 60 representatives from all 32 teams in the National Football League gathered in the Manning Center on Friday morning for Ole Miss’ annual Pro Day leading up to April’s NFL Draft. A chance to work out for teams in a friendly, home environment, it was also the last time a lot of former Rebels will get to take the field together.

“We knew it was our last time from the start. We said that and we prayed about it and we just had fun with it,” said receiver DaMarkus Lodge. “You can’t get these times back so you just make the most out of it.”

Lodge is one of just three Rebel receivers moving on to the next level, and that doesn’t even count pass-catching swing tight end Dawson Knox. A.J. Brown, Ole Miss’ all-time leading receiver, and D.K. Metcalf, a human testing prototype, have been taking up much of the attention, but Lodge himself is a mid-round prospect for the draft.

“It’s a blessing that those guys are getting all that attention. If they weren’t, all those coaches wouldn’t be in there and I wouldn’t be able to show them what I can do,” Lodge said, laughing. “They bring that attention and I’m glad and happy they did.”

Where Lodge should go some time on day two or three of the draft, Brown and Metcalf are both potential first round picks. Taking throws for one last time from senior quarterback Jordan Ta’amu, there may not be another quarterback in the country who has benefited as much from getting to work with such high-caliber talent at the pass-catcher position.

Ta’amu is a late-round prospect himself, but at the very least should see himself signed as an undrafted free agent to an NFL roster. Quiet and humble, yet reflective, Ta’amu recognizes how helpful having that stud receiving trio during his time as a Rebel has been.

“It benefitted me a lot. Having those guys as weapons on the outside, my job was just to get them the ball. Just watching them make plays was amazing,” Ta’amu said. “I wish them the best of luck in this draft and I’m super excited to see where their future goes.”

Other notes from the Pro Day

The Ole Miss offense under former offensive coordinator Phil Longo didn’t ask players to do too much. Nearly every route happened on a vertical plane, a limited collection of routes compared to what NFL teams use. Just able every player talked to on Friday mentioned that the route tree is something the NFL teams were asking them about in meetings, something they tried to show a variety of in workouts Friday.

“It’s been pretty fun for me going into film sessions and explaining how we ran a lot of different routes in practice. Any route on the tree I was able to showcase that stuff out here that I may not have shown on film,” said tight end Dawson Knox. “I think I’m on the same page with some of these coaches now and being able to show them that I’m capable more than I put on film.”

Knox didn’t run at the combine in Indianapolis, recovering from a sports hernia surgery from after the season. Now fully healthy, Knox was impressive on Friday. He ran a 4.57 in the 40-yard dash and showed the ability to catch the ball well coming in and out of his breaks smoothly. A mid-round prospect, Knox’s ability to show coaches more than what’s on film and the stat sheet will be key.

4.59 40-yd on his first attempt pic.twitter.com/MEwwVCNWl3

Some interesting and fun post-workout quotes:

D.K. Metcalf on being the home-grown talent: “It’s finishing off what I tried to accomplish, being the home-town hero. Staying at home and playing college football here where my dad played. It’s just doing the best I could while I was here and going off and finishing my career in the NFL.

DaMarkus Lodge on workout numbers versus playing football: ““At the end of the day, testing is very important, but you have to put the ball down and play. I wanted to show that I might not be a 4.3 (40-yard-dash) guy, but when you put the ball on the ground, I’m going to play 4.3. I can run routes. I can separate and I can catch the ball smooth. I think I checked those boxes.”

Dawson Knox on the Avengers: “I joked about going and seeing the Avengers after I get drafted… my favorite Avenger is probably Iron Man. He’s one of the originals. I think that was probably the first Avengers movie I really watched. I had it downloaded on, I think my iPod video at the time… I think he’s probably going to die. I guess we’ll see.”