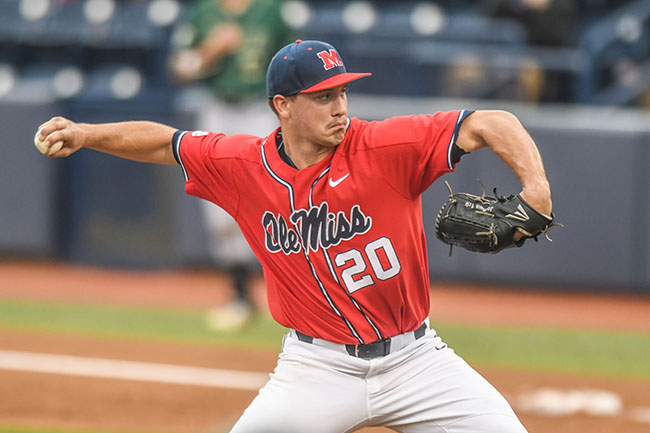 The opening two weeks of SEC play haven’t exactly gone to plan for Mike Bianco’s Rebel unit. Bright spots have shone through, and the team is certainly learning things about themselves, but it’s time to for Ole Miss to put the pieces together.

Ole Miss got the bottom-feeders to start conference play and walked away with just a 3-3 record. Now things get a whole lot harder with a trip to 21-4 and No. 8 ranked Arkansas. Here’s four things to look for entering the Razorback series.

First Base: Rebel pitching questions beginning to sort itself out

What a difference one week makes. The replacement of former Saturday starter Zack Phillips with true freshman Doug Nikhazy was a game-changer, at least in a one-week sample. In his first start against SEC opponents in Missouri, Nikhazy threw 7.2 innings of scoreless work, allowing just two hits on the road.

Will Ethridge has been a staple all year in the Friday night role, having allowed just one earned run through his first two SEC starts. Sunday starter Gunnar Hoglund, another true freshman, struggled at Missouri last weekend, but allowed just one run in his SEC opener against Alabama.

Second Base: Where can the Ole Miss offense find runs against the Arkansas staff?

At times in 2019, the Ole Miss offense has been dynamic and shown tremendous pop. In six SEC games, that hasn’t exactly been the case. Just about everyone’s numbers, across the board, have fallen in conference play. On some note, that’s expected – you’re not going to hit the same way against Alabama as you do against Arkansas Pine-Bluff.

What isn’t expected is just how much they’ve fallen. As a team, Ole Miss is hitting just .223 in conference play and have recorded just eight extra base hits and just two home runs in the first two weekends of play. That’s simply not going to cut it against a Razorbacks pitching staff that’s allowing SEC opponents to hit just .181 against them. It’s not the best formula on paper for a turnaround.

Third Base: Razorbacks offense a model of consistency

It’s hard to properly state just how good this Arkansas team has been thus far. They’re 21-4 for a reason. Both sides of the ball are incredibly balanced, and the consistency they get from just about every member of their lineup is relatively astonishing.

Six of the regular nine starters for Arkansas hit above .300, with just two hitting below .280. In six SEC games, the Razorbacks have hit six home runs, 11 doubles and have walked 15 times. There’s pop everywhere and Ole Miss is in store for one of the tougher lineups they’ve faced all year.

Loposer has made just 19 plate appearances on the season for Ole Miss, yet 11 of the 19 have come since last Friday. The third string catcher from Jackson Prep has caught the eye of Mike Bianco and the staff but has been up and down since his insertion into the lineup at designated hitter.

In his first two games against Mizzou, Loposer went 3-6. However, he is 0-for-5 in the last two games and went 0-for-3 with three strikeouts against Memphis. The designated hitter spot has been one the Rebels have been experimenting with all season. Loposer has been the recent addition after Kevin Graham and Tim Elko before him. Where Bianco decides to go for this weekend is completely up in the air, but look for a fresh face in Loposer to make some appearances.

Truly, the Razorback series is a critical one for Ole Miss. They haven’t looked up to their potential to open SEC play, and things just keep getting harder. After No. 8 Arkansas, Ole Miss will host No. 23 Florida next week. It’s hard to expect the Rebels to win the series against Arkansas, but they certainly can’t leave Fayetteville winless.