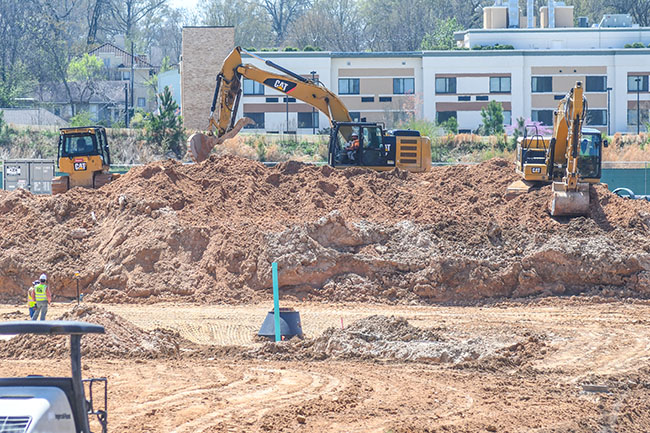 Work is underway at the location of what will be the Oxford School District's new Central Elementary School, in Oxford, Miss. on Thursday, March 28, 2019. (Bruce Newman, Oxford Eagle)

During Monday’s Board of Trustees meeting it was revealed the Oxford School District is over budget on their $38 million bond that was passed in 2017. The bond was created in order to fund a new elementary school and several other projects, including a fine arts building.

Currently, OSD is $7 million over budget and a discussion of the Board’s options was held at the meeting. Representatives from Innovative Construction Management presented updated construction costs, totaling $42,612,772.02, nearly five million dollars over the total of the bond. The updated costs did not include the price of needed furniture and other supplies that Oxford superintendent Brian Harvey noted would be another $2.2 million.

Some of the issues the project faces include the footprint of the newly-named Central Elementary will be 90,000 square feet, instead of 76,000 square feet that the project was originally budgeted for. The school district was not able to get $86,000 worth of city building permit fees waived as was anticipated.

“We are quickly coming to the point where we have enough information where we need to start thinking about secondary courses of action and where we need to go from here with the bond money and the projects that are funded by the bond,” Harvey said during the meeting.

The budget for the new elementary school was originally set at $18,495,008.00 but the Board approved an increase to $21 million in September.

The fine arts building also encountered new issues after its initial budget was projected. An increase in lights needed went into effect six days before they were set to advertise for bids on the project, which increased costs. Two boilers need replacing that will cost $60,000 and was not on the original budget or estimates. The city did not waive building permit fees for this project, totaling $53,251 that the district was hoping to be waived.

A new baseball and softball field at Oxford High School are projects scheduled for this current bond issue but the Board has not approved a budget for them. It has been determined that a 14-foot retaining wall will need to be constructed on the north side of the project site.

The idea of losing the baseball field in an effort to save money was brought up by Harvey during the meeting.

“We have $38 million in funds. We have to come to a decision,” Harvey said. “Do we fund the baseball complex out of the fund balance or do we look at some type of alternative funding or do we cut it?”

The Board held a budget meeting today to discuss the baseball field issue as well as the total bond budget to begin to figure out a plan moving forward.

Trusty named first-year Teacher of the Year by OSD